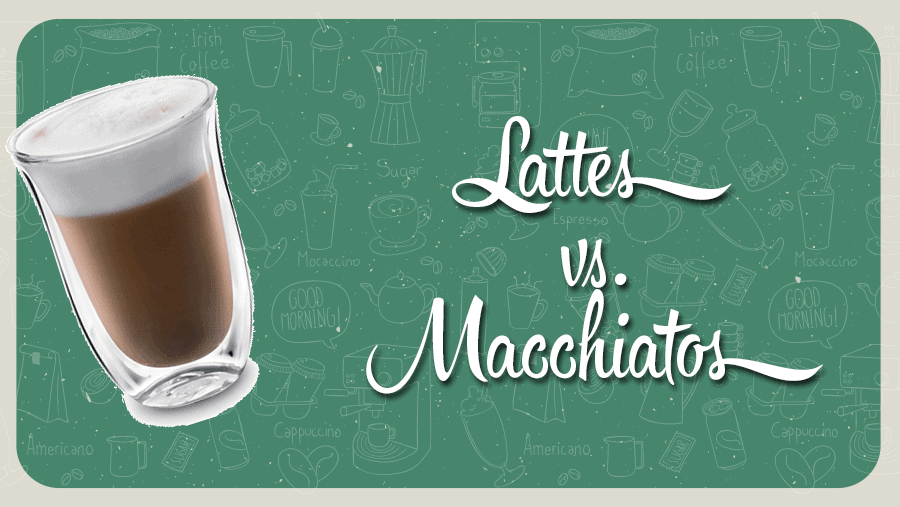 Love the creamy silky mouth feel of the first sip of a Latte? Or is a Macchiato more your cuppa Joe? Both these specialty coffee drinks essentially start with a shot of perfectly brewed espresso.

However, in the debate of macchiato vs latte, the first thing to bear in mind is that coffee chains have sort of warped what lattes and macchiatos actually are.

So if you’re used to Starbucks Macchiatos and then order a macchiato at a specialty coffee shop, you’re going to get something very different(though much more authentic).

I don’t mind drinking either lattes or macchiatos – it just depends on my mood and what I am feeling like having. However, there are slight differences between the two types of coffees.

Even though they are both based on espressos, the key difference lies in the milk: how much there is and how it has been foamed.

Just the same way a latte and flat white are different, lattes and macchiatos are different, too. The way milk has been foamed makes all the difference in the world when it comes to flavor and texture.

Milk can be foamed to just have what’s called “velvet microfoam” – which are small bubbles of air trapped in the milk, giving it a very smooth and velvety texture.

There can also be what’s called “dry foam” – which is the heavy, thick foam on top of cappuccinos – it would be rather hard to drink an entire cup of dry foam since there is more air than milk, giving it that “dry” feeling in your mouth.

The easiest way to tell the difference between a latte and a macchiato is to just look at the beverage! The images below will help clarify things even more. 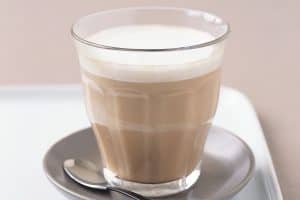 The picture above is of a latte preparation. Notice how the coffee has blended very well with the milk(becoming much lighter) and there is some light foam at the top of the cup. 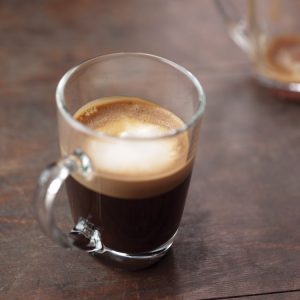 The picture above is a macchiato. Notice how the coffee is very strong and black(almost like a straight shot of espresso) and there is a layer of thick milk foam at the top which has not fully mixed with the coffee.

Lattes are much more dilute since they’re fully mixed into the milk, and macchiatos are much stronger since they’re essentially an espresso shot with a separate layer of foam on top.

Is a Macchiato stronger than a latte?

Macchiatos are indeed stronger than lattes – at least to the taste. Like we mentioned above, lattes are espresso shots completely mixed into the milk, which will greatly mellow down the flavor.

Macchiatos by contrast will taste like a pure espresso shot with just a kick of milk at the top, creating a unique taste experience.

However, if you can’t tolerate extremely strong flavors then you may want to stick with lattes instead of macchiatos.

As far as caffeine content goes, there is not much difference, since both lattes and macchiatos contain espresso shots.

In that case, it depends on the kind of coffee grounds you use. Lighter roasts tend to have weaker flavors but greater caffeine content(by volume) and darker roasts have more intense flavors but less caffeine.

Most baristas and cafes use the same kinds of beans in making the espresso shot for macchiatos and lattes, so macchiatos will taste more intense than lattes. All that milk you add in the latte will dull down the flavor but add a creamy texture from the steamed milk.

How to make a traditional macchiato

Macchiatos are of two variants, it seems – there is the original macchiato, which is a very strong coffee drink, since it’s mostly espresso with a tiny bit of “marking” milk foam at the top.

Then there is the Starbucks version of a macchiato(I’m guilty of being a sucker for their caramel macchiatos) – which is milk at the bottom, espresso in between, and foam at the top.

Either way, the macchiato is a very strong drink – and you may want to give it a quick stir before enjoying it, otherwise the first few sips may be highly bitter.

Using high quality espresso beans in the macchiato is very important, as this is the primary flavor in the drink. It has a bolder flavor than many other coffee drinks, as it is only a small amount of milk that marks a cup of espresso.

Once your cup is ready give it a quick stir to make sure you don’t get a very bitter taste in your first sip, pour in about one or two ounces of steamed foamy milk directly into the center of the cup. To get a nice foam on your milk gently draw the milk jug lower as you steam. Don’t forget to make your mark on your macchiato!

The proper way to serve a macchiato is usually in a tall, clear glass in which the distinct layers can easily be seen. Coffee is as much a visual experience as it is an experience for your nose and taste buds!

The original macchiato is fairly straightforward to make – just prepare your espresso shot, mark it with some steamed milk foam, and you’re good to go.

How to drink a macchiato

What’s the right way to drink a macchiato?

Remember, a macchiato will only be slightly lighter in color than a straight shot of espresso, so do you mix it or not?

When you pour the steamed milk into the shot, it will inevitably mix into the coffee – you can’t keep the two liquids separate, obviously.

If you decide to mix in the little foam that remains at the top into the macchiato, it will make the beverage a little cooler since the foam is cooler than the liquid underneath. Plus all the air will escape, meaning you won’t be able to enjoy the foam.

A traditional macchiato will have just enough milk to make the espresso shot a tiny bit lighter and leave a dot of foam on top.

However, when it comes to coffee, I strongly believe that there’s no wrong way to drink it, and if you prefer mixing a macchiato before having it, by all means, go for it.

It’s also worth noting that the way Starbucks interprets macchiatos is totally different than a traditional Italian macchiato.

How to make American(Starbucks style) macchiatos

American macchiatos are a little more complicated in the sense that they require a bit more prep. Let’s get into it!

This recipe is from Eugenie Kitchen. It’s not the exact Starbucks recipe but it is a fairly close and equally delightful variant.

Add vanilla syrup into a warmed up glass, and froth the milk and pour most of it into the glass.

Now pour in the espresso shot, and top the drink off with some milk foam.

History of the latte

Lattes don’t have as much of a concrete history as cappuccinos or macchiatos. As milky coffees became popular throughout Europe in the 19th and 20th centuries, drinks similar to the latte started popping up.

In France, a popular milky coffee is known as cafe au lait.

However, the exact term “latte” is more of an English-speaking invention rather than an Italian invention. Latte recipes slowly developed and usually contained espresso, milk, and added sweeteners like sugar or syrup.

How to make a latte

Latte(pronounced la tei) is an Italian word meaning milk. So if you’re ordering a Latte at your favourite café, you’re going to get coffee with steamed milk. Traditionally a latte is 8 ounces to 12 ounces, but some people serve them in larger sizes, too.

Grinding your own beans gives you ultimate control over your masterpiece brew.  You will need about 2 ounces of espresso in the eight ounce cup.

While the espresso is brewing, steam the milk holding the jug steady under the steam spout. Make sure you let out a burst of steam from the spout first so that you don’t get any water in the milk.

The milk should not get too foamy or too thin. Try to get a nice sheen and fine microfoam and make sure it sticks to the sides of the jug when you swirl it. This will tell you the milk is done.

Pour the steamed milk into the espresso shot with a circular motion. You can finish pouring by making a swirly pattern on the surface with the movement of your milk jug. Enjoy!

Since we’re talking about macchiatos and lattes, we should also talk about cappuccinos, since they are pretty much in the same category of espresso-based beverages that are served with milk.

The most commonly used cappuccino ratio is 1/3 espresso, 1/3 steamed milk, and 1/3 foamed milk. You can actually think of a cappuccino as halfway between a macchiato and a latte.

Personally, I prefer cappuccinos as far as milky coffees go, but you should drink what you enjoy.

To make a cappuccino, you can use an automatic machine that will do everything for you, or you can pull an espresso shot, steam some milk separately, and combine the two.

For steaming the milk, you can use your espresso machine’s built in steamer/frother, or get a separate milk frother.

Finally, you’ll want some really nice demitasse cups to enjoy the coffee in!

I hope that this post was able to clear up some of the confusion amongst these specialty coffee terminologies!

Is a latte or macchiato sweeter?

Lattes are sweeter than macchiatos as they have a lot more milk. Macchiatos are mostly just an espressos shot topped with a dollop of milk, so you’ll taste a lot more espresso.

Why is Starbucks macchiato different?

Most likely because Starbucks feels like they can sell sweeter coffees better than bitter coffees!

Is a macchiato stronger than coffee?

A macchiato will have less caffeine than a typical 8 ounce serving of dripped coffee, but the taste will be more intense since it is made with an espresso shot.