Keurig K425 vs K525. These two machines may seem very similar at an initial glance, but are they really? All Keurigs are quite similar, but there are indeed some key differences from model to model.

Whether that justifies the difference in price is up to you, but you may consider one or two features to be well worth the price.

Now for the fun part. Which of these features are really necessary, and which are meh?

Both the Keurig K425 and the Keurig K525 are locked into the Keurig 2.0 ecosystem. In their newer models, Keurig has gone back to the old Keurig 1.0 system where any coffee pods will work fine. The K525 comes with the Keurig My K-Cup, which you can fill with your own coffee grounds.

Both machines are also compatible with Keurig K-Carafes which you can use to brew a large volume of coffee at once.

While the My K-Cup can be bought separately, because it’s included with the machine, the Keurig K525 takes the cake here.

You can adjust the temperature on both of these brewers to fine-tune your coffee. A hotter temperature will mean more extraction. Too hot can ruin the flavor, so it’s best to experiment and find the sweet spot for your personal preference.

Capacity to me is not that important. In my house it’s just three people, and even between three of us, we don’t drink THAT much of coffee per day. So an 80 ounce reservoir or a 70 ounce reservoir, it doesn’t make a difference.

But if you want a machine for a high volume/high traffic area, then 10 ounces may make a difference to you. After all, 10 ounces is one more cup of coffee!

In that case, the Keurig K525 is indeed the winner in this category.

The display size is actually quite significant. Even though the difference is less than half an inch, the distance is measured diagonally, so it’s actually a lot larger than it would seem.

The bigger LCD will definitely be easier to use if you have larger fingers.

The water filter kit and reusable My K Cup are packaged with most 525 models, but I did find listings on some sites where the 525 was a standalone machine.

If you are getting the K Cup and filter, then it’s a good deal, especially if you like to brew your own coffees rather than be limited to the kind of K cups you can buy ready.

The filter is also very useful if you live in an area with hard water(trust me, I know – I’ve spent 4 days once descaling an old coffee machine that had been lying unused for a couple of years).

Even if the water supply to your home is decent, using filtered water will always result in better coffee. You can buy a filter separately, but if you’re already getting one with the Keurig, why not get the package?

The Keurig K525 wins in this category too.

The last two features, the nightlight and wallpapers are rather gimmicky and I don’t often change the background on my laptop, let alone my coffee machine.

Some people like to customize everything, though, so for them the ability to change wallpapers may be a huge plus.

I can also imagine certain situations where you can utilize the wallpaper for branding purposes, though, like in an office or any commercial setting.

It would be a neat way to impress your customers and clients.

Note: The Keurig K425 and K525 are since discontinued, but are still available online from old stock and as refurbished models. 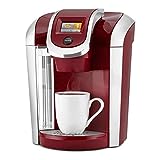 The Keurig K425 is one of the first machines Keurig made that had the capacity to brew a single cup or a whole carafe at the same time. Equipped with a generously sized 70 oz water tank, the K425 can make a lot of coffee/other beverages in one go.

The touch screen display is intuitive and easy to use. Just select the strength of the beverage and the size, and you’re good to go – the machine will brew it and get it ready in 1 minute.

You also have the ability to control temperature, which is great for fine-tuning the flavor you want. 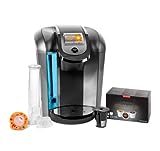 The K525 can be thought of as the bigger, stronger brother to the K425. It can do everything the K425 does, but it has a larger tank(80 oz) so you can squeeze out one extra cup of coffee, plus a wider range of beverage sizes.

There is also a built in nightlight(like you read above), but honestly, this seems overkill and unnecessary. It’s like one of those features that manufacturers add to justify a higher price point or to make a product seem more appealing.

Between these two machines, in all honesty, it’s just a toss up. Check out the condensed version below to help make a decision!

So which will it be?

The Keurig K425 is the right machine for you if:

The Keurig K525 is the right machine for you if:

As you saw, comparing the Keurig K425 and K525 does not yield that many differences. At their core, they are very similar brewers. However, some people may prefer the extra features and feel the added cost is justified.