Nespresso machines are at the pinnacle of being easy to use. At first glance, it may seem like you just have to pop a capsule and press a button, but there is a little more to it. Let’s learn how to use a Nespresso machine. 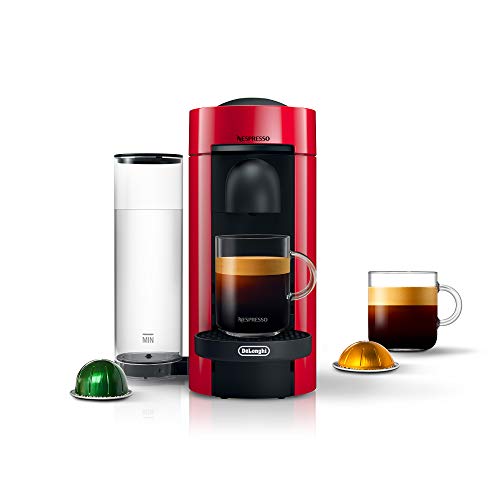 Nespresso machines are quite similar to other pod based machines: basically, you place a pre-packaged coffee capsule in the capsule holder, close the machine, and press a button to brew a shot of coffee.

This is quite similar to the way Keurig coffee makers work, except Nespresso machines are dedicated coffee machines, whereas Keurigs can be used for making teas and hot chocolate, too.

Nespresso is not quite espresso, but it’s very similar, and if you’re using coffee pods, it’s the next best thing to a properly brewed espresso.

Since 2014, Nespresso has released a second line of coffee machine called Nespresso VertuoLine. OriginalLine uses a smaller coffee capsule design which comes in two sizes: espresso and lungo. These capsules look like miniature Keurig K-Cups, but are made of aluminum.

Vertuoline capsules are very different: they are shaped like a half-dome, are much larger than OriginalLine capsules, and have a barcode on the rim of the pod which the machine uses to change brew parameters according to the type of coffee there is.

Vertuoline capsules are much larger as they’re designed to brew varying sizes of coffee. VertuoLine machines were introduced for the North American market where larger drink sizes were preferred to the smaller espresso and lungos.

Will all that out of the way, let’s move on to how to actually use the machine!

How to use a Nespresso machine for the first time

When you open up your brand new Nespresso machine for the first time, you’ll probably be itching to brew some coffee and enjoy it.

Not so fast! You’ll have to rinse the machine first!

Rinsing involves cleaning both the water tank and rinsing the internal pipes of the machine.

Most Nespresso machines have removable water tanks, so go ahead and remove the water tank, rinse it out with warm soapy water. Wash out the soap, and fill up with clean drinking water before replacing the water tank on the machine.

Next, you’ll need to rinse the pipes. To do so, first place a cup or mug under the nozzle to catch any water. Then press the lungo button to “brew” one lungo, but without inserting a coffee pod.

Once the water has dispensed into the mug, run two more cycles for a total of three lungo cycles. This is sufficient to clean and rinse the Nespresso machine.

How to brew with the Nespresso

Now that you’re ready to brew your first cup of coffee, power on the machine if it’s not already on and insert a pod into the pod bay. Make sure there is water in the water tank.

Most OriginalLine machines have two brew buttons: one for espresso, and one for lungo. Others may have a third ristretto button too.

Each of these three brew sizes is programmed into the machine:

Simply pressing any of those buttons will dispense a brew for you. You can also customize the brew sizes however you like.

Once you let go, your preset will be saved and the Nespresso machine will brew your programmed amount every time you press that button.

You can customize all two or three of the buttons. We recommend customizing just one or two buttons and leaving one at the default.

If you find espresso to be too strong, for example, brew a slightly longer espresso shot to dilute the flavor a little bit.

Alternatively, you can leave the espresso at the default, and program the lungo to effectively be the same size as an Americano.

If you’ve got a Latissima Nespresso machine and want to make specialty coffees like lattes and cappuccinos, there’s one extra step.

Latissima machines have a milk frother that typically has two markings on it: one marking for a cappuccino and another marking for a latte.

The amount of milk dispensed will depend on the amount you fill into the milk frother reservoir. So if you were making a cappuccino, you’d fill up to the lower line.

Make sure you’ve got enough water in the reservoir and a new pod in the pod bay ready to go.

Next, you fit the milk dispenser onto the machine, and once the machine has powered on, press the milk button (the icon with the foamy cup) to get the machine to start dispensing milk.

Use a glass big enough for the amount of milk you’ve filled it! The Nespresso machine will continue to dispense milk until the reservoir is empty.

Once all the milk has been dispensed, the Nespresso machine will brew coffee and your preparation will be ready.

Unless you’re making a second cup right away, Nespresso recommends that you clean the milk frother right away. You’ll need to disassemble it completely: the reservoir, the spout, the plastic pipe, and the attachment mechanism all come out.

Nespresso Vertuoline coffee makers are much easier to use, as you can match the pod to the brew size you’re lookign for. Nespresso VertuoLine machines only have a single button on top.

When you press this button, the machine will read the barcode on the capsule you place in and dispense a suitable amount of water.

Cleaning up the drip tray and capsule storage

The drip tray and capsule storage is often connected in most machines, so cleaning up both will be a one-off affair.

Drip trays are important, as there’s always a little bit of extra drip in espresso machines after the coffee has fully brewed, and the drip tray will catch it.

Additionally, when you open the capsule bay after brewing a shot, the old capsule is automatically ejected into the capsule container, which will fill up after a few capsules depending on the size of your machine.

You can also empty the machine out by removing the water tank and pressing the espresso and lungo buttons together on OriginalLine machines.

This will remove any water from inside the system. Make sure you place some type of container under the nozzle to catch the water!

It’s important to descale a Nespresso once every 3 to 6 months depending on the kind of water you get in your home. If you live in an area with hard water, you’ll need to descale once every 3 months or less. If you use softened water or RO water in your home, you can get away with descaling once every 6 months.

Descaling is simply using a mixture of an acid and water and using it to flush your entire system one or two times. The acid will dissolve any scale buildup.

For acids, you can use household acids like citric acid or lemon juice, or you can pick up Nespresso descaling solution, which is quite expensive.

Once the descaling process is done, just flush the machine two or three times with regular water to get any residue out of the machine and then proceed to use as normal.

Nespresso machines are best known for their incredible ease of use and simplicity. While detractors will say that Nespresso coffee is not real coffee, we’d like to disagree: coffee is coffee and if you enjoy it, there’s nothing to stop you from enjoying it!

Hopefully you found these instructions useful. If you have any questions, please leave a comment or get in touch with us and we’ll try to help you out as best as possible.