The French Press is the most versatile little device to make coffee. Not only you can make great hot coffee but also easily choose how much of it you want.

This is perfect for single drinkers or if you don’t need several cups for a huge boost of caffeine.

And last but not least, the French Press is awesome to make iced coffee too. In two different ways even, with a big difference in taste and acidity.

More possibilities than a good deal of coffee brewing methods. What’s not to love about a French Press?

We are going to talk about how to make excellent iced coffee with French Press, in both ways: hot brewed and then chilled or as a cold brew. 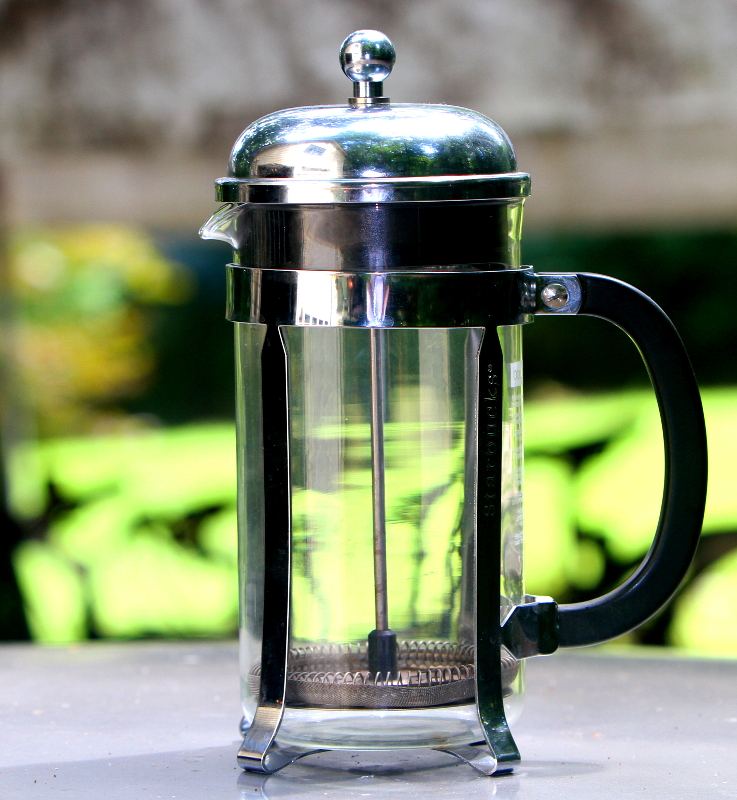 How to make iced coffee with a French Press

You would think that the most straightforward way to make iced coffee with a French Press is to brew it hot, normally as you would do any morning and pour it over ice.

It can be done, yet it wouldn’t work the best in the case of an iced coffee. The ice cubes you’re going to add after the brewing to cool the coffee down are going to dilute it, causing an alteration of its taste, for the worse.

Unless you love watery coffee, that is…

To properly make a good iced coffee with French Press some tweaking to the brewing process is necessary. Most importantly should be to take into account the ice cubes’ volume.

A rough calculation of how much water is in the ice cubes will suffice. It doesn’t have to be super-accurate, as not all water will end up in the coffee until the very end, when all the ice has melted.

Deduct the amount of water from the ice cubes from the total of boiling water you’ll need to brew the coffee, making it thus a tad stronger.

The rest of the recipe is mostly the same as for a hot brewed French Press coffee:

While waiting for the brewing, prepare the glasses to serve the coffee: choose highly heat-resistant glass recipients.

Or grab a ceramic/metal mug. There’s going to be a big temperature clash between the ice cubes and the hot coffee, so it’s better to have a very resistant recipient to prevent any breakage.

It’s possible to freeze in advance the glasses, leaving them in the freezer for a while, and use thus just 1-2 ice cubes, or to use room temperature glasses with lots of ice cubes.

The alternative to the above method would be to make a cold brew with the French Press, and chill it even more before serving if required.

This is an even easier brewing method with a French Press, perfect for new users of the French Press, requiring a couple of steps less:

And that’s it. Nothing more is necessary, unless you want your iced coffee truly cold. A couple of ice cubes will make it reach the right temperature then.

Otherwise, the cold brew is done, ready to drink as soon as the plunger is fully down. Technically, it isn’t exactly categorized as an iced coffee, as it is a term used for hot brewed coffee that has been chilled after the brew.

But from a drinker’s point of view both a classic iced coffee and a cold brew, with or without a French Press, are cold coffee, ready to drink.

The true difference lies in the taste. The chemical reactions caused by the different temperatures used to extract the coffee, cold or hot, will extract different solids from the grounds, generating a vastly different drinking experience.

While in both cases the coffee will have a good body, the hot brewed French Press coffee will be more bitter, way more acidic and more intense.

On the opposite, a cold brew made in a French Press will be mellow, with medium to low intensity, barely with any bitterness while maintaining a good deal of acidity.

Therefore, the choice between an iced coffee and a cold brew lays much in these taste characteristics: more intense, acidic and bitter vs mellower and no bitterness.

It’s up to your personal tastes, both are great in their own way, with cold brew having the advantage of lasting quite a lot more than iced coffee.

Whereas with the latter you must consume it immediately to savor all its flavors, a cold brew is quite good even a few days after being brewed. Just keep it in the fridge.

A word of advice for people with stomach issues caused by the coffee acidity: they should particularly be wary of either method.

This is because the French Press produces on average a good acidic coffee that can easily upset delicate stomachs. A low acid coffee is recommended.

As we have seen, preparing iced coffee isn’t as simple as adding enough ice cubes to hot coffee to make it cold.

It requires thinking about the effect those ice cubes will have on the final taste, and if you actually want to make a cold brew coffee instead. Iced coffee with French Press is quite easy to prepare, be it a cold brew or a hot one.

The French Press is a lovely device also because of this exceptional versatility. A cheap, easy to brew, simple to clean, and durable tool that any coffee drinker would do well to have in their brewing arsenal.