Everyone loves a nice, refreshing glass of cold brew coffee, but chances are you’re not going to drink all of your brew in one sitting. So an important question that comes up is how long does cold brew last? 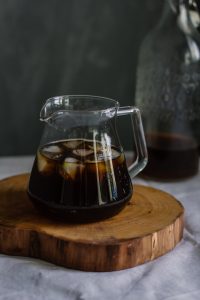 How long does cold brew last in the refrigerator?

Since cold brew is well, cold, you’ll be storing it in the fridge rather than outside. Cold brew will keep for quite a few days in the fridge. Compare that to hot coffee, which hardly lasts more than a few hours before tasting like swill!

There’s actually two types of cold brew: a concentrate and a diluted drink.

Cold brew concentrates will usually keep in the fridge for 1 to 2 weeks. There is no exact number, though many readymade, bottled cold brews from companies like Stumptown have a much longer advertised shelf life.

As for homemade cold brew concentrate, I would recommend about 1 week to be safe and 2 weeks if you really want to push it. Once you dilute it, I would not store it for more than 2 to 3 days. You will start noticing a distinct degradation in taste by then.

That doesn’t mean it will spoil or turn rancid, but you won’t enjoy it as much.

If you decide to add milk or cream to your concentrate, drink it right away. It will start going bad very soon, since you’ve introduced other things into the beverage.

This is similar to iced coffee, which is commonly served with milk. Any time you add milk to a coffee, the shelf life plummets.

While we’re on the topic of storing cold brew and how long does cold brew last, we should talk about if cold brew can go bad or not! The answer is no. Cold brew doesn’t go bad per se to the degree that milk or juice can go bad.

However, cold brew can become stale, overly acidic, and lose its taste. In some rare cases, it can start picking up mold, too.

Obviously, you don’t want to store it for so long!

Remember, one to two weeks is the most you’d want to push it. If you don’t think you’ll be able to have that much cold brewed coffee in so much time, just make less!

Normally, though, you’ll probably end up drinking your whole batch of cold brew within a week. I typically brew one liter of cold brew in a single go, and that lasts me about 7 to 8 days if it’s just me drinking. I usually fill half a glass with concentrate and top it off with more water, a splash of milk, or have my coffee poured over ice.

How do you know if cold brew has gone bad?

Cold brew coffee generally has a fresh, mild, and mellow taste. To enjoy cold brew fully, you’ll need to drink it cold! If left sitting out, you won’t get the same experience.

Once the coffee starts tasting overly acidic or stale, you know it has gone bad.

Another telltale sign of cold brew coffee gone bad is if you see weird things floating around in your coffee like the beginnings of mold.

It’s very rare that cold brew will go bad enough to make you sick, but after the seven to ten day mark, it will no longer taste as good and you should just dump it out into your yard or down the drain.

Does cold brew need to be refrigerated?

If you’re thinking you can just store your cold brew at room temperature and then drink it poured over ice, you’d be mistaken. Cold brew coffee MUST be stored in the refrigerator.

Even after brewing, store your coffee in the refrigerator. Keeping it outside will not result in an enjoyable cup, even if it’s winter and your house is pretty cool throughout. In hot summer months, keeping your coffee outside is an absolute no-no.

To store your cold brew in the fridge, use a plastic or glass bottle that you can tightly close shut. A screw-on cap is the best option, but if you have a pitcher that doesn’t have a top, use plastic film to cover the top.

Coffee is very good at absorbing odors and since your fridge is full of so many different odors, you want to try and close off your coffee to any outside influence.

How to ensure the freshest coffee possible

The freshest coffee comes from using freshly roasted coffee beans. Coffee beans retain their freshness for about 2 weeks after roasting, compared to coffee grounds which lose most of their potency within a few hours at best.

Regardless of whether you’re making hot coffee, iced coffee, or cold brew, grinding just before brewing will produce a much fresher beverage.

Granted, you could probably make coffee using older grounds and it will still keep in the fridge for the 7-14 days, but it won’t taste as good from the start as a freshly ground brew would.

How long does cold brew last in your system?

Caffeine has a half-life of 6 hours, which means if you drink 200 mg of caffeine(about what you’d get from a 16 oz glass of cold brew), in 6 hours, you’d still have 100mg of caffeine in your system.

Should cold brew be refrigerated?

Yes, 100%. Cold brew must be stored in the fridge to ensure maximum freshness.

Can cold brew make you sick?

If you are very sensitive to caffeine, cold brew can make you feel unwell.