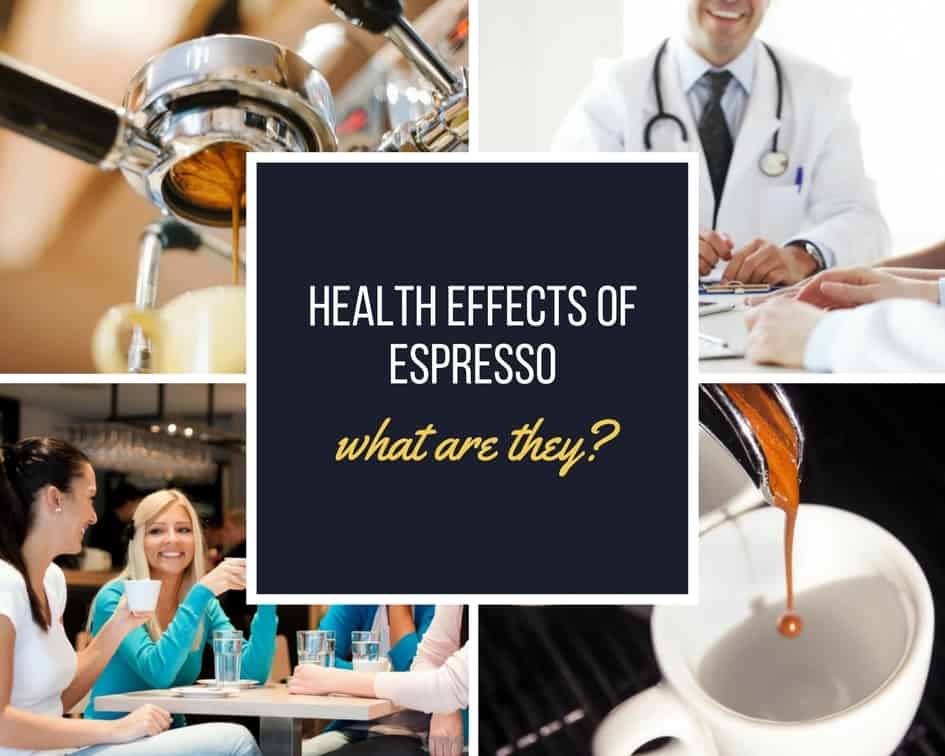 Caffeinated drinks in one form or another have been around for awhile.  However, it has really been in the last couple decades with the explosion of Starbucks that have caused the pure quantity of espresso consumption to soar.

Drinks like the espresso have really become a daily ritual for many adults all around the world. But, sometimes when something gets really popular, we haven’t stopped to properly evaluate their effects on us.  So, what are the health effects of espresso?

There have been many articles touting the health benefits of coffee, but for some reason people may wonder if espresso’s extra kick comes at an extra cost.

First off, lets get something straight.  People are often under the incorrect assumption that espresso delivers an intensely high amount of caffeine.  Consumer Reports looked into this statement and found that the average shot of espresso is 63mg per ounce.  Now, that might sound much higher, as they also recorded that the average slow drip coffee contains 16mg per ounce.

However, when is the last time somebody drank only one ounce of coffee?  A 12oz coffee is above and beyond the amount of caffeine contained in the average double shot of espresso!

According to Harvard, espresso is also better for your cholesterol levels than most other coffee preparation methods.  The reason for this is that there is a substance called cafestol that is in coffee beans that stimulates LDL cholesterol slightly.  The only coffee brewing method that faired better than espresso was when paper filters were used to brew coffee, as the paper filters absorbed more cafestol.  However, paper filters in general can remove other healthy fats and oils from your drink, and also are not the most environmentally friendly option.  So, espresso is the clear winner here, too.

Livestrong reported on a few different studies that all tied into weight loss via espresso, as well.

One study cited showed that drinking an espresso or two resulted in weight loss, given no other lifestyle changes.  The explanation was that by drinking that espresso, it raised your body’s ability to generate heat.  This extra heat generation was the equivalent of burning an extra 80-150 calories over the course of a day.  For anyone who has ever struggled on a treadmill and saw how few calories were burned, you understand.  This small change in calories alone adds up to about 8 additional pounds of fat burnt over the course of a single year!

Another study that Livestrong quoted was that those who had espressos before a meal had their hunger suppressed.  This means that a person who had an espresso before a meal would not be inclined to eat as much.  Essentially, meaning fewer calories were consumed overall.

And, for the trifecta of weight loss studies they mentioned how taking espresso before a bout at the gym actually made the workouts more effective.  The workouts became more effective simply because people felt that they could push harder and for a longer duration, and did.

But, what about the dark side of espresso drinking?  Surely it is not all positive, and there must be a limit.  And, like most other things in life, that is entirely true.

The EFSA (The European Food Safety Association) ran a study to see if there would be any additional risks if an individual drank 400mg of caffeine per day.  The results were in, and even 400mg daily is safe.  At least for the average individual.  Pregnant women should be more careful, of course.  Otherwise, this gives you room for about 5 espresso shots without having to worry about health risks.

5 shots of espresso is above and beyond what most people will do over the course of a day, of course.

But, what about the stories of people overdosing on espresso?  Well, those are pretty rare.  But the story linked to above was from a girl who decided to take 7 double shots in a row.  Not good.  Your body needs time to digest caffeine (quite a bit, actually).

Be sure to drink responsibly, as espressos make it easier to get that condensed mixture of caffeine.  Although espresso contains less caffeine than a regular cup of coffee or an energy drink, it is only one ounce of fluid.  That makes it a lot easier to trick yourself into thinking that you should drink a lot more.

So, assuming that you drink responsibly, that you are not pregnant, and that you do not have high blood pressure or hypertension or other health risk factors, an espresso will likely do you good.

Aside from that, caffeine in any form comes with its usual disclaimer: try to avoid caffeine the second half of your day, to avoid sleep issues.  The side effect of keeping you perky and not tired in the mornings has the flip side.  That can easily carry over into keeping you from feeling tired at night when you are trying to sleep.

Many cultures take a strong espresso after dinner, and they seem to do just fine, right?  Yes, they do.  But are you sensitive to caffeine?  Did you down a few cups over the course of the day?  Know yourself, and know that if you have sleep problems, try dialing back on your caffeine after lunch.

As with any health advice, here is our disclaimer: we are not physicians and we do not like being sued.  Talk to a physician about your particular health situation.

But, for the vast majority of people, reaching for that espresso… and second, third, and even fourth.  You are going to be doing just fine, and reaping lots of health benefits to boot.

And, definitely do not skimp on the crema.  That is where a lot of the natural oils from the coffee beans go.  You wouldn’t want to miss out on those extra health benefits of espresso!