There have been countless different ways to make cups of coffee. Each of them is different from one another and has certain pros and cons, making users feel confused to choose the best way for themselves.

However, with certain experiments in the field, you- a coffee drinker, must have your own ways for your desired coffee taste, right?

And as I discover, Pour Over and French Press coffee maker are the two most favorite brewing methods among coffee drinkers. These two methods are common in some characteristics, but different in some aspects. So what makes them different from each other and which one is better? My honest article today will be a clear explanation for the questions. 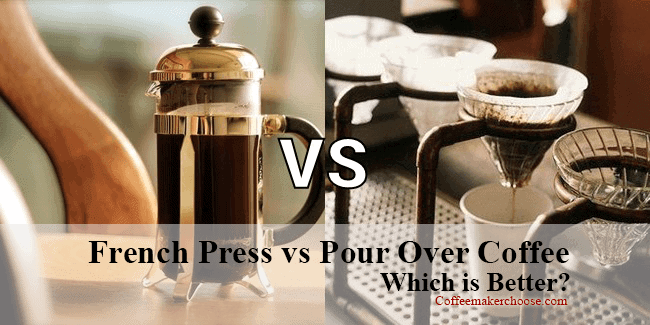 French Press vs Pour Over

A French press, also known as cafetiere or coffee press, is a round cylinder-shaped glass with a plunger. It normally comes with stainless steel filter which works to direct the grounds to the ending and make conditions for the liquid to flow through. It has most impressed users with the featured plunger

A French press is the most widely-used brewing method in Europe and the US. And unlike it is suggested in its name, the press is first developed by an Italian designer in 1929, and then it is promoted and preferred in other area around the world.

French Press is loved due to the fact that it can deliver much bolder and richer taste beverage compared to that delivered by other machines.

While a French Press has impressed users over years in use, the Pour Over coffee dripper has quickly gained user’s interest once it in use. It depends on a cone to gain the full extraction. It starts working by storing grounds in the top of the cone and waits for the water being added in a circular motion (to make sure that all of the grinds get soaked). At this point, you have to let they stay still for some seconds to have the ground and the water saturated before repeating the process. The coffee then slowly makes its way to flow through the filter and into a mug. That is the reason why it is named “coffee dripper”.

And because of that being said, some variations of Pour Over methods have been created. Some users choose drippers to place on a mug, but others choose glass decanters. What device doesn’t matter, it is up to your own preferences.

Coffee brewed by Pour over methods seems to be in a lighter flavor than that by French Press. This may give one more factor for you to consider between the two types. So what more the two methods are different from each other? Keep reading!

How are French Presses and Pour Over different from each other? 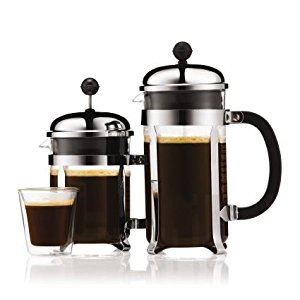 The French Press used to be the most convenient way to brew coffee at home. All of you need for a nice cup of coffee are the brewer itself, of course, coffee ground and hot water. To do the process, put the coffee into the part under the plunger in the press, then add the water to the flask and select your desired flavor level to finish the process. As long as the coffee is brewed to your preset level, the plunger will automatically push down to force the coffee grounds to the bottom of the flask. This process helps to protect them from floating freely in the water, decreasing the contact with and the coffee’s extraction.

On the contrary with the French Press which has the coffee literally steeped in the cups, the same way as brewing tea, pour over coffee lets a very little amount of time for coffee and hot water in contact with each other, and then has a filter to isolate the coffee from the grounds. The grounds used for brewing is finer and the resulting coffee is in lighter flavor compared to French Press.

As it is mentioned earlier, French Press requires the least equipment. All of you need is the press itself, grinds and water. The press itself is also a piece of equipment.

French Press probably brews the most inconsistent taste; it’s up to the length of time that you let the coffee in the press. This inconsistence is due to the fact that the filters are still in place, making condition for the steeping to happen, which significantly affects the coffee’s taste. 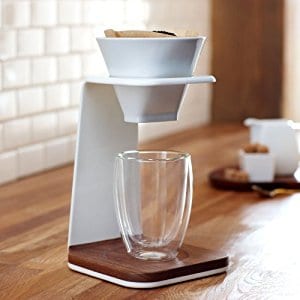 The taste of coffee made by French Press can be highly unpredictable after each brew as users tend to let the coffee in the press until they’re ready to drink it. Although the coffee and water brewing is restricted and the machine uses coarser grounds, the steeping process still happens, making a highly bitter and oily brew – especially when the heavier roast is used. In addition to this, sediment in the coffee grounds can affect the coffee.

With the addition of the filter and thanks to a short extraction time, coffee made by Pour Over is much smoother, lighter, and cleaner.

So those who are interested in a more full-bodied cup may prefer the French Press. This method is also ideal when drinking coffee for the caffeine. But choosing it, you lose your chance to enjoy the intricate flavors – the next level when it comes to drinking coffee. And of course, those who like lighter coffee may like Pour Over method.

In comparison with Pour Over, French Press method is in higher risk of sediment, while it has filters. This issue is due to the fact that uses tend to let the coffee in the press until they are ready to drink, which makes more chances for the coarse grind to escape into the drink.
In contrast, Pour over method is in less risk of this. The method lets a little time for the water and coffee grinds in contact. In addition to this, it uses finer grinds and will deal with in the water even once they escape into the coffee itself.

Apart from the sediments, coffee made with French Press method seems to be more oily when it uses heavier, coarser grounds.
[wp_ad_camp_1]

French Press and Pour Over, which is better?

It is hard to say which method is better. While Coffee aficionados assume that Pour Over coffee brews the best coffee, others support the French Press. So there is no definitive answer. We can only identify which one is better and suited for us, depending on our own taste preferences. For the best choice, if possible, we recommend trying both of them and then come to conclusion which one is better for yourself.

In conclusion, both a French Press and a Pour Over coffee maker claim to give you delicious cup. The issue here is what flavor you prefer. So let’s ask yourself: what do you prefer? And ask for some advice from real users to have the best choice in the end.