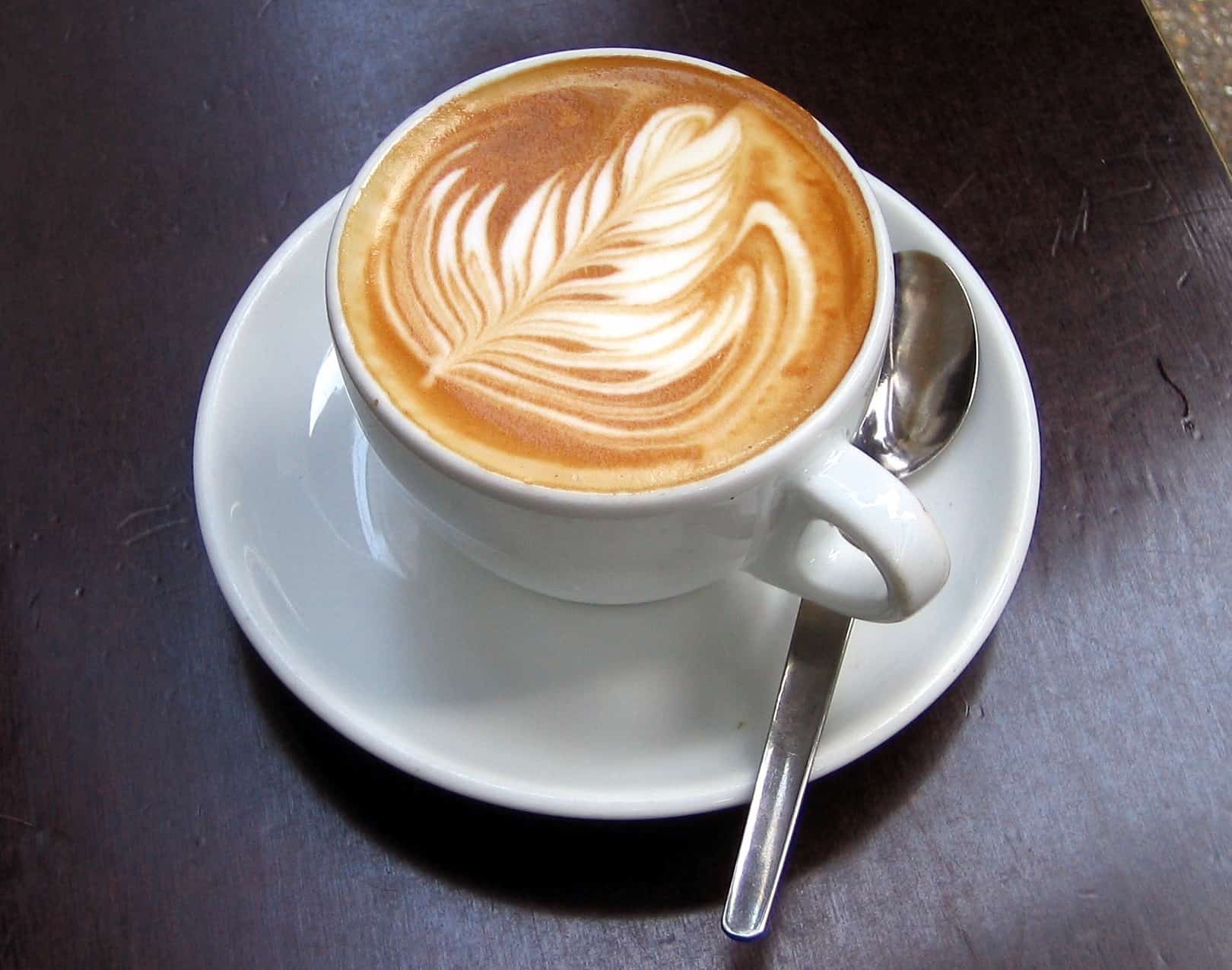 As far as milky coffees are concerned, two commonly found drinks on most cafe menus are the good ol’ latte and the flat white. Lattes are fairly commonplace and have been around for a while, whereas the flat white is a bit more recent. Here’s a quick rundown on the major differences between flat white vs latte:

In fact, not many people really knew what a flat white was until Starbucks started serving it, and before you could say “coffee”, everyone started putting it on the menu.

So where do flat whites come from? The Aussies and Kiwis both lay claim to the drink, saying their own nationals first came up with the idea.

Some sources say that it was actually a New Zealander, Derek Townsend, who came up with the drink. Townsend apparently enjoys mythical legend status in the coffee world down under, as it’s said that he could grind coffee with his bare hands and prepare 1500 beverages in a single hour!

Note: This is, of course, a tall tale and a joke – but it goes to show how myths and legends creep into coffee, too!

The Aussies also have a pretty strong story, though. A gentleman named Rob from Geraldton, Western Australia got in touch with me with a really interesting story:

Back in about 1980, here in West Australia (Perth at that time), I was working as an assistant to a German Pastry chef at the Boulevard Patisserie in Cotteslo Beach.
I was only about 16-17 and had a real sweet tooth.
As we started very early so as to have our pastries ready, we’d finish early too and I used to catch the train into Perth city then onto Queens Park where I lived back then.
I’d break up my homeward journey with a quick cappuccino at the Corinthian cafe, just on Hay St Mall.
I drank cappuccinos for a few months, but eventually realized I was getting only half a cup of coffee and half a cup of froth(air!)
Being a daily regular, they started to make my coffee all milk, hold the froth…!
At first we called it a flat cappuccino but quickly changed it for ease of convenience to a “Flat White”.
Incidentally, lattes came on the scene here much later, some years actually.
I dont recall when exactly but wen i heard a friend order a latte I asked what’s a latte and he basically described my flat white.
Oh and tell that Kiwi fella he can have the pavlova (the very desert I ate with my flat whites).
Because on the pav are Kiwi Fruit slices, always kiwi fruit and pinapples, which tells me it must have a Kiwi origin.

These two stories are incredibly interesting, and it’s safe to say that the flat white must have originated in both places independently of one another.
What a coincidence!

To an unassuming observer, the latte and flat white are both just milky coffees(latte is the Italian word for milk). And to a certain extent, that may be true – the amount of coffee is the same in both preparations – a single or double shot of espresso.

Both drinks are milk preparations with espresso shots – so the caffeine boost and the taste of the coffee itself will be quite similar.

In fact, if I gave you a latte and told you that you were drinking a flat white, and you didn’t know what to look for, you may not be able to tell the difference.

However, once you get to identify the subtleties and nuances in each coffee, the differences really shine and you can enjoy each one individually and properly.

First off, a flat white is served in a smaller glass than a latte. Some unassuming baristas may end up just serving you a small latte if you order a flat white, so size is not the most reliable distinguishing factor! However, lattes are large, and flat whites are slightly smaller, but not quite as small as shots.

After all, both flat white and latte are shots of espresso mixed with milk.

Flat whites are stronger than lattes, simply because they have less milk in them for the same amount of coffee! So naturally, flat whites will have richer coffee flavor and stronger notes than lattes. Lattes have much more milk, so the coffee flavor is dulled down.

The real difference between a flat white and a latte is the texture of the milk, which forms by the way it was steamed and how it was mixed with the espresso shot.

A latte is a foamier drink, with thicker foam at the top. There’s also a lot more milk in general. Flat white is a smoother drink, where the microfoam is mixed consistently throughout the whole drink.

The way to differentiate between the two drinks when preparing them is by the way you pour the milk.

If you’ve made a cake using a recipe where you separate the whites and fold them in later, you’ll have seen that the foamy egg whites are folded into the batter, resulting a smooth and consistent batter.

Flat whites are made the same way – (good) baristas will pour steamed milk in such a way that it gets folded into the espresso shot, creating a consistent texture throughout the drink.

Because there is no thick, large bubble foam in the flat white, the top is “flat”, perhaps giving the coffee its name!

Steamed milk texture is a bit complicated, but here is my best attempt at a simple explanation:

You must have seen baristas steam milk in a little metal pitcher using the silver colored steam wand at one extreme of their espresso machine. The resounding yet satisfying “fsssssst” signaling the release of the pressurized steam makes my mouth water every time!

When milk is steamed, 3 distinct layers form in the milk:

At the very bottom of the pitcher, there is hot liquid milk

In the middle is what baristas refer to as velvet microfoam. These are tiny bubbles of air trapped in the milk – so tiny that the feeling they’d give you on your tongue and in your mouth is velvety smooth, hence the name.

On top, you have the largest bubbles, or the thickest froth.

This makes sense, because steam tends to rise, so the biggest bubbles and thickest foam will be at the top of any mixture.

A latte will taste like a coffee diluted with milk – you may actually taste the milk more than you taste the coffee.

A flat white will taste more like a smoother, creamier espresso shot.

Lattes are best enjoyed and usually served in glasses, whereas flat whites are served in smaller cups.

Lattes, cappuccinos, and flat whites all have some form of coffee froth(known as crema) that rises to the top of the cup when milk is poured in. This is the orangey layer that you’ll find at the top of your cup.

A sign of a good flat white is that the espresso shot will be more uniformly mixed with the milk.

According to 12WBT, here is an approximate calorie count for flat whites and lattes. This is a small to average cup size(the site did not provide exact measurements).:

As you can see, using skim milk you can enjoy a coffee for relatively fewer calories, but once you use full cream milk, the calorie counts start ticking up(of course). Still, the piccolo latte is a mere 46 calories, and the flat white is 155 calories.

It’s still far less than the Mocha, which comes in as a full meal replacement at nearly 400 calories!

Where to find the best flat whites

Even though Starbucks serves flat whites(and I like Starbucks, even though they’re a bit overpriced – for me, it’s about the atmosphere just as much as the coffee), the best place to go looking for the perfect flat white is where it originated from!

Why is it called a flat white?

The flat white gets its name because the layer of milk on top is flat. Compare this to a latte, where the milk is much foamier and thicker.

Is a cortado the same as a flat white?

Why is a flat white one size?

Flat whites are very specific preparations, so they’re typically available in just one size. To make the flat white bigger, you’d have to add more milk, which would mess up the flavor.