The many different names of coffee can sometimes get our caffeinated brains in a bit of a jumble, but in this post, we’ll help you understand exactly what is espresso and how it’s different from coffee. Next time you’re wondering about the difference, you’ll have the answer and facts at your fingertips! 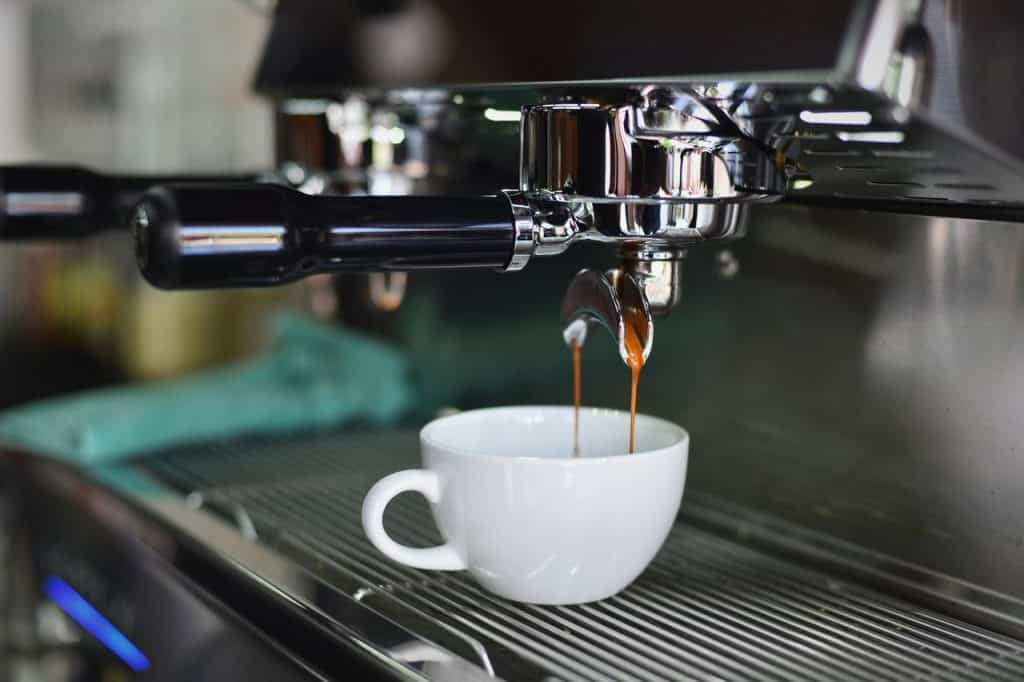 What is espresso, anyway?

Espresso is actually a form of coffee, it is just made differently. Espresso is made by pushing water at very high pressure through a tightly packed puck of finely ground, powdery coffee.

The pressure required for an espresso brew is 9 bars, which equals to about 130 pounds of pressure per square inch. Unless you’re Superman, you can’t generate that kind of pressure without the help of an espresso machine.

On the other hand, traditional coffee is usually made by dripping water through coffee using a filter, or immersing it in water as you would in a french press.

Where taste is concerned, there is a small difference between regular coffee and espresso. Espresso tends to have a more full and intense flavor compared to the more mellow taste of coffee.

More differences between espresso and coffee

Now that we have discussed the different taste of espresso and coffee, let’s take a look at some of the other differences and the similarities between these drinks. It could prove useful the next time you make a cup of coffee.

Some manufacturers would have you believe that you need very specific espresso coffee beans to make genuine espresso. Some coffee shops will even sell beans advertised as espresso, but there is no such thing. So, if you have seen coffee shops with this kind of bean, you may want to go somewhere else.

In other words, you can make espresso with anything from Arabica beans to Robusta beans. Whether you need to make an espresso shot or a good tasting espresso in general, your focus should lie on the way you make it.

The brewing process for a cup of espresso is a little different from standard coffee. If you don’t really want to mess around with manual presses, you can simply purchase a good espresso maker for your cup or espresso shot.

If you are looking to make a good espresso by using a manual press, always make sure that you get an even and fine grind. The grind should also be distributed evenly in the portafilter to ensure the best result.

How many ounces in a shot of espresso?

A shot of espresso is typically 1.5 to 2 ounces. Double shots are 4 ounces. In metric measurements, a single shot is 60 ml, and a double shot is 120 ml.

How much caffeine in a shot of espresso?

According to Caffeine Informer, one shot of espresso has around 77 mg of caffeine. On the other hand, one cup of drip coffee has closer to 150 mg of caffeine.

However, espresso has more caffeine per ounce than coffee. In espresso, you get 77 mg of caffeine from 1.5 ounces. In drip coffee, you get 150 mg in 8 ounces.

So if you drank 8 ounces of espresso, you’d be getting a lot more caffeine!

A good espresso shot will generally have a layer of crema on top and a shot of coffee on the bottom.

Crema is considered to be the sign of a great espresso shot. There’s some debate about this, but for the most part, a thick layer of crema indicates freshly roasted beans and proper extraction technique.

But what exactly is the crema, anyway?

When you brew the coffee, the carbon dioxide and the oils are released very rapidly.

The crema is a layer of foam that forms on top of the espresso: this is the last of the carbon dioxide and oils that are mixed together to make a foam.

There’s no real taste to crema, and some people even advocate removing it or mixing it into the shot before drinking.

Espresso is generally on the sweeter side and has a full body and mouthfeel. A good espresso shot will feel thick in your mouth. Not as thick as honey or syrup, but thicker than water.

Because the entire extraction is incredibly fast, a lot of the good tasting compounds of coffee are drawn out and the acids remain in the grounds.

Getting Your Espresso Taste Just Right

One of the things that can influence a good tasting coffee is the saturation of the grind. To ensure you get all the caffeine from the grind, you must make sure the grounds are evenly distributed. Once the water comes through, it will improve the taste and the overall caffeine content.

Not many people are sure what the saturation process entails, so let us elaborate on how to get the best results and a cup of espresso you like as a consequence. When you place the grounds in the portafilter, make sure that everything is evenly distributed and that you tamp the coffee down strongly.

The stronger you tamp the coffee, the more resistance the grounds will provide to the water flowing through them. This will extract a bolder flavor.

Evenly tamping your grounds means the flavor distribution will be even, too.

The temperature of the water will play a crucial role in making a good-tasting espresso. To make a good coffee, or espresso in this case, you need the right temperature. It usually lies between 190 – 205 degrees Fahrenheit, but this may vary slightly depending on the manufacturer of your espresso maker. It is always a good idea to check all these details in the instructions of the coffee maker.

It is important to know that the caffeine in your brew is released during the first minute of the brewing process. As such, time is a crucial component to create the best cup of coffee.

For an amazing tasting espresso, you should stick with a time between 20 and 30 seconds. Evidently, brewing a regular coffee will take a little longer, as the water drips through slower.

The way you grind can have an influence on the caffeine content too. The finer the grind, the easier the caffeine will be transferred to your cup of coffee. A fine grind is also best for espresso, as a coarse grind will not give you the best result.

Is espresso stronger than regular coffee?

This is very much a myth. In fact, the strength of coffee and caffeine is determined by more than just the type of coffee you are having. It really depends on the type of roast you’re using.

An espresso made from a light roast will taste much weaker than a french press coffee brewed from a dark roast.

Drinks you can make from an espresso

A ristretto is a shorter espresso, meaning it uses less water but the same amount of coffee. As you may expect, a ristretto will be stronger than an espresso.

A lungo is a long espresso, which uses the same amount of coffee but more water.

This popular drink is easily made by combining some hot water with one or two shots of espresso. It was actually invented during the war time, but remained popular in America once the war was over.

Most people adore a good latte. It is made with some steamed milk and one to two shots of espresso. For most lattes, you will notice a frothy surface. However, this particular option is often confused with a flat white.

This is arguably the most popular type of coffee in the world. The reason why is not hard to find, because it is made up out of three different layers. The bottom layer consists of a shot of espresso, followed by some steamed milk and some frothy milk on top.

It is not uncommon for baristas to add some additional ingredients on top of the cappuccino. Chocolate shavings or chocolate powder are most popular, but other ingredients can be used too.

The flat white is a coffee that originates from Australia and New Zealand. It consists of steamed milk, which is poured over an espresso shot. However, contrary to the latte, this version is creamier.

Most people do not see the difference between the macchiato and the cappuccino. However, there is a difference.

To create a macchiato, the barista uses as shot of espresso and then adds a dot of foamed milk on top.

What Is Ristretto? An unrestricted definition and guide

Espresso vs lungo: The long and short of it

Ristretto vs espresso: Know your shots like a boss

Can you make espresso with regular coffee? Answered.

How To Drink Espresso The Right Way and Enjoy It Fully

How to make espresso without an espresso machine: 5 methods

Next time you want to make or order an espresso, you’ll be an expert. Go ahead and impress your friends and your barista with your newfound knowledge!