Espresso and cappuccino are both espresso in different forms, but what are the differences? In a showdown between espresso vs cappuccino, how do you know your coffees?

Both drinks are incredibly popular and tasty, so how the heck do you even go about comparing them?

Let’s talk a little bit about the differences between espresso and cappuccino. Indeed, we’ll talk about the similarities, too! 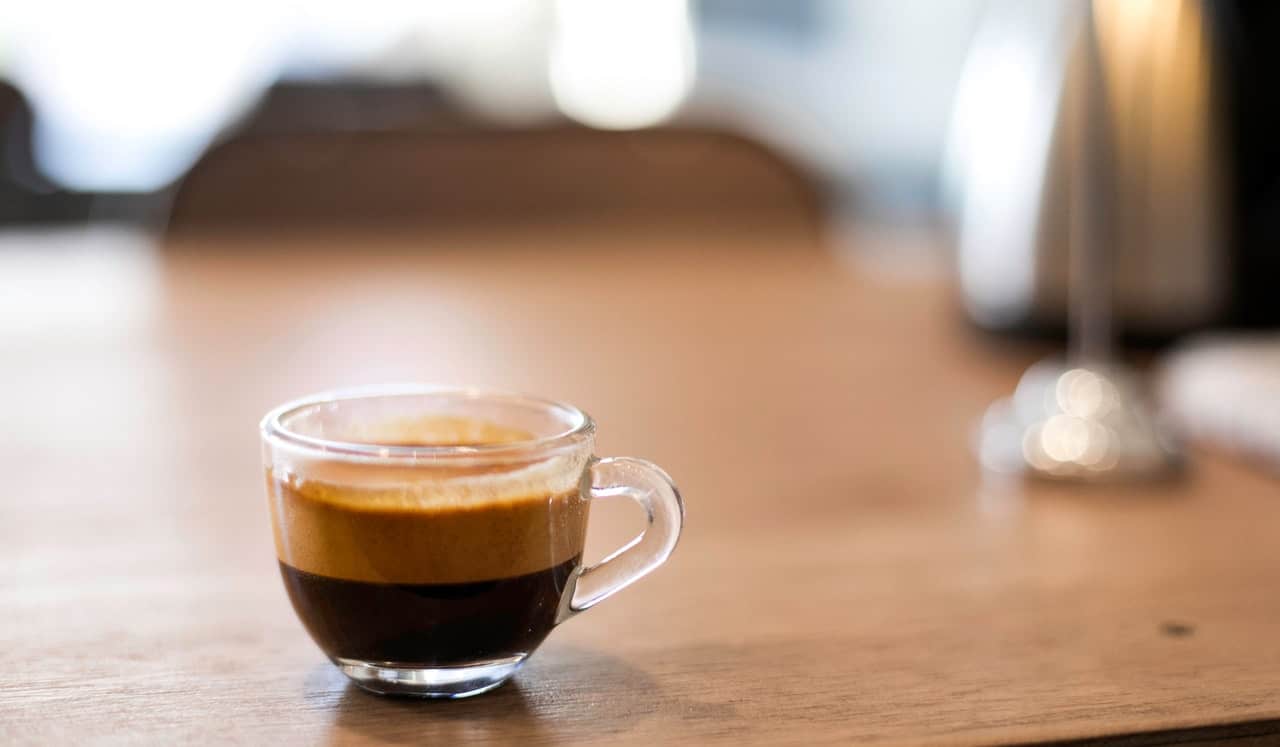 Ideally, though, the best way to brew is using an espresso machine.

Essentially, espresso is made by forcing water under high pressure through a tightly packed puck of coffee grounds. Ideally, the grounds should have been freshly made from coffee beans just before brewing.

The grounds are very fine to force the water only to go through if under a lot of pressure. The result is a very intense, bold brew and the best part is that it only takes half a minute or so to make.

There’s no one way to make an espresso, as you’ll see: machines use varying amounts of pressure, you can slightly vary the grounds, and it also depends on how tightly you tamp the grounds into a puck.

Still, the result is basically the same: a bold, thick shot of coffee – even though it’s just 1.5 ounces.

Once you have an espresso, you can either drink it as is or add some frothed and steamed milk and make it a cappuccino.

This is also why cappuccinos and espressos contain the same amount of caffeine.

Like the espresso, cappuccino is also an Italian drink. Before espresso became popular worldwide, cappuccino gained popularity especially during the second World War.

I am guessing cappuccinos gained popularity first because they’re less intense and who doesn’t like the velvety mouthfeel of steamed milk?

The standard size of a cappuccino cup is 6 ounces. That is typically 2 ounces of espresso(a single shot), 2 ounces of steamed milk, and 2 ounces of frothed milk.

An interesting thing to note here is that in a truly authentic cappuccino, there is a difference between steamed milk and foamed milk.

Depending on the espresso machine you have, the milk dispenser really won’t differentiate between steamed milk or foamed milk. The only way you can truly make an authentic cappuccino is if you froth by hand.

A proper cappuccino also means the coffee isn’t mixed with the milk altogether – it actually should be topped with steamed milk and milk foam.

One variation of a regular cappuccino is a bone dry cappuccino, where there is no steamed milk and the entire 4 ounces of milk will be milk foam. Foamed basically means there is a lot more air, so the mouthfeel will be much drier.

It’s all about the foam

As you saw above, the cappuccino is a coffee drink where an espresso shot has milk on top of the coffee(steamed and foamed). If you are drinking a straight shot of espresso, instead of foamy milk, there is another foamy layer called crema.

Crema is actually one of the biggest indicators of a properly brewed cup of espresso, and the richer the crema, the better the coffee will taste(most of the time).

So what exactly is crema, anyway? When you extract a shot from freshly ground coffee, the grounds will release a lot of gas upon first contact with hot water and pressure. This gas(carbon dioxide) will dissolve into the water and form the bubbly, foamy layer on top that we call crema.

Along with the CO2, oils in the coffee grounds also play a part here, which is why the crema will settle at the top of the shot. The crema will be thickest when you first pull the shot, but it will stay there for a short time in case you don’t get around to drinking it right away.

Crema itself will add some extra texture to the espresso shot, but don’t expect it to have a distinct taste of its own. However, sipping with crema sometimes helps to dampen the intensity while still letting you experience the different flavors.

Also, since crema develops as the gases inside the coffee grounds are released, fresher beans will result in more crema development than stale beans.

It’s all about the milk

So as you can see, the key difference between these two coffee drinks(espresso and cappuccino) is indeed the milk. However, don’t add a splash of milk to espresso, especially in a social setting!

Drinking espresso is a very cultural experience and doing something wrong may end up insulting your hosts!

You can add a touch of sugar to an espresso shot if the flavor is too intense, though.

If you really want milk, then it’s a cappuccino you’re looking for, and in that case, it won’t be regular milk – it will be steamed milk and foamed milk.

If you use half and half instead of milk, you end up with a Breve coffee.

Espresso and most of its derivatives are from Italy. The drink is said to have come about in the early 20th century. Drinking espresso is a very social activity and in Italy, you’ll find plenty of specialized espresso bars.

Making a good espresso is half following best practices and half adapting to your own tastes and preferences. There’s a lot to be said on the subject and every coffee snob(myself included) has their own opinions.

It will always make for a very lively discussion!

So which should you drink?

Why not both? Cappuccino and espresso are both classic coffees, and drinking either is great in our books! My morning routine has kind of evolved into a cappuccino immediately after waking up and a shot of espresso or an Americano a couple of hours later.

I like the foamy, milky texture in the morning and once I am a little bit more awake, the bold espresso tickles my senses!

Does espresso or cappuccino have more caffeine?

What is the difference between Dalgona and cappuccino?

Cappuccino is made with an espresso shot pulled from an espresso machine. Dalgona coffee is made by whipping together instant coffee, water, and sugar, and ladling the mix over milk.

Is espresso stronger than coffee?