If you retched at the thought of that, don’t worry. I was also a little queasy at first thought, but after I gave it a shot, I actually realized that it’s really, really good and I may start drinking it every day!

Don’t worry, you won’t really notice the “egginess” in your coffee – these recipes take the best of what eggs do (emulsify) and use that property to make a really smooth and creamy coffee.

Still having doubts? Just scroll down at random, choose any one recipe that you think you’ll find interesting, and go for it. Try it once! 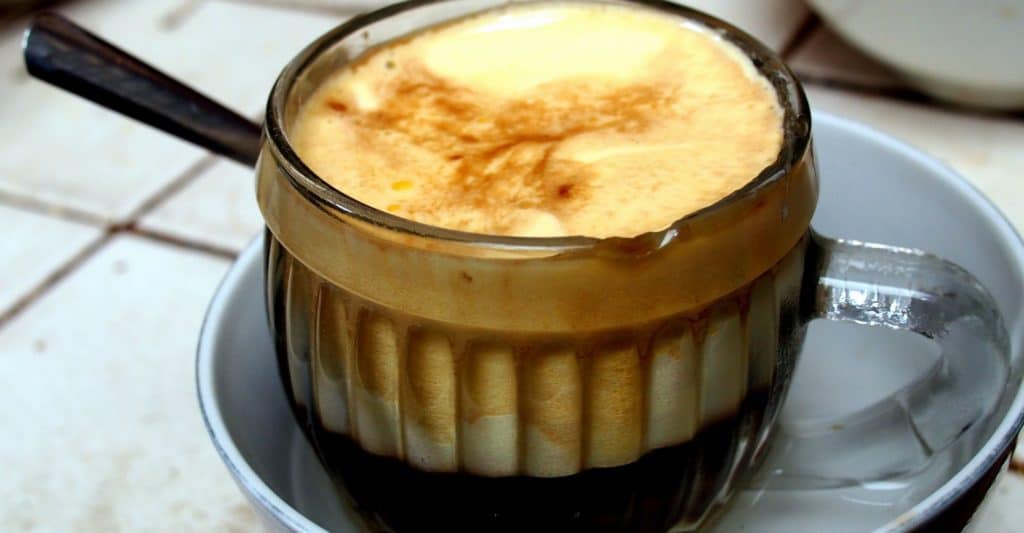 The beauty of Vietnamese egg coffee is that it uses the emulsifying property of egg yolks to make a really smooth and rich liquid, which when combined with coffee makes a really tasty concoction.

Egg coffee originated in Vietnam in the mid-20th century when milk shortages prompted a chef who wanted to serve cappuccinos at the Sofitel Legend Metropole hotel in Hanoi to use whisked egg yolks instead.

Nguyen Giang, who is the son of the Cafe’s founder, claims that it was his father who was working in the Sofitel. I suppose the coffee was such a hit at the Sofitel that he decided to open his own dedicated cafe!

Since original Cà phê trứng is a proprietary drink, it’s difficult to exactly duplicate the recipe but many people have made their own versions and they taste just as good.

Today, Vietnamese egg coffee has been voted as one of the best coffees in the world!

Interestingly enough the only kind of egg coffee isn’t just the Vietnamese one. There is also a very famous Swedish egg coffee, and a few other countries have their own varieties too. Since Vietnamese coffee is the most popular, we’ll start with that.

Often called a liquid tiramisu because of the creaminess and coffee flavor, Cà phê trứng is actually deceptively simple to make. There’s just one thing I am not a big fan of which is you have to discard the egg whites(unless you whisk them into an egg-white omelette).

To start, crack an egg yolk into a bowl and add two teaspoons of condensed milk. You can use a brand like Carnation or whatever brand is available – it just has to be the sweet kind.

Whisk the two together until they’re combined well. Here, I’d suggest you use a hand mixer because it will take forever with a fork or a whisk. As you mix, you’ll see the liquid become more and more bubbly and frothy – this is good! You can continue mixing to make it as frothy as you like.

If you can, do it the traditional Vietnamese way using Vietnamese coffee and a phin, which is a local dripped coffee filter. If you don’t have a phin on hand, you can use any drip coffee method you like.

For bonus points, use a gooseneck kettle to pour the water over the coffee grounds. Let the brewing process take about 4 to 5 minutes.

This is just to make sure you have a nice, strong coffee brew which will be nicely complemented by the foamy, airy egg mixture.

Pour over unavailable? No problem at all, just use whatever you have on hand: a drip coffee machine, a french press, or even an Aeropress. Just make sure you’re using the correct consistency of grounds.

Once the coffee is brewed, spoon the egg and condensed milk mixture – which should be nice and frothy – on top of the coffee. Even if the froth dips into the coffee a little, don’t worry, since there are so many air bubbles, it will just bounce back up.

Another variation you can try is to beat the egg yolks with sugar to help encourage soft peaks to form, then fold in the condensed milk. You can experiment and see which one you like best!

Swedish egg coffee is actually even older than Vietnamese egg coffee, and if it weren’t for the popularity of Vietnamese coffee, perhaps this would still be considered the original egg coffee.

This preparation was introduced to the United States by immigrants from Scandinavia, and earned the nickname church basement coffee because it would be served by those communities after services on Sundays.

The egg acts a binding agent in this case and keeps the coffee grounds stuck to the bottom of the cup, letting you have a clear, smooth cup of coffee.

As far as coffee recipes go, this one is really, really interesting, so do give it a try. The recipe below serves 2. Since you need a single egg for two cups, this is the easiest recipe to follow. Technically, you can beat the egg in a bowl and try to split it in two equal parts for a single cup.

In a bowl, crack the egg(whites and yolks), and add the coffee grounds and a quarter (1/4) cup of cold water. Mix everything together until it forms a nice, smooth paste.

Take a spoon and remove any coffee particles you see floating on the surface. Strain the coffee through a fine strainer to remove all coffee grounds, and you’re left with a smooth beverage that you can either serve hot or cold.

If you’re a big fan of the keto and paleo diets, and you want to switch around between bulletproof coffee and something else, try egg yolk coffee instead! It’s based on the same principles, though bear in mind that you’ll miss out on the MCTs from coconut oil.

Of course, you can also just make bulletproof coffee and add the egg yolk for an extra protein boost.

Brew 300ml of coffee using your favorite method. Just don’t use pod coffee, try to use something as fresh as possible. I personally use a french press or an Aeropress. Both make really good coffee that I love.

Add 3 egg yolks and the sugar to the coffee, and blend on high speed for 30 seconds or so until everything has become smooth and consistent. While you’re blending, you can also go ahead and add the butter and coconut oil.

When you pour the coffee out it will be nice and frothy on top. This is the perfect place to sprinkle some spices like cinnamon or vanilla for an added kick of taste.

The last recipe on our list is Indonesian and ideally, the best kinds of beans to use here are Sumatran beans. If you can’t get your hands on them, though, don’t worry.

Note: As you can imagine, this coffee is hella sweet!

Brew your 1/2 cup of coffee using your favorite method.

In a glass, combine the egg, vanilla, and honey and mix well. Add 1/4 cup of boiling water into the mixture and whisk as you add. You want to form a smooth, foamy mixture.

Add the condensed milk into the mixture, right into the center(this is important).

Add the coffee into the center of the condensed milk(this is important too).

By pouring in this manner, you’ll essentially create a three layered drink: the egg and honey at the bottom, the coffee in the middle, and foam on the top.

The ideal way to enjoy this drink is using a straw.

Finally, let’s take a look at how many calories you’re going to consume in one serving of Vietnamese egg coffee. You can use the calculations I’ve provided here to see how many calories are there in the other coffee recipes as well.

In total, one serving of egg coffee will contain about 96 calories. That’s not bad at all!

Have you tried any of the recipes above? What modifications/experiments did you do to make it your own? Please let us know in the comments!

The beauty of coffee is that it is just so versatile and you can enjoy it in so many different ways. Even adding things like eggs, which otherwise would seem gut-wrenching actually enhances the flavor!