Sometimes a single shot of coffee is just not strong enough, is it?

For an even stronger cup of coffee, one method you can use is called double brewing. Double brewed coffee can mean either:

The goal from double brewing, whether you choose to brew twice or to use twice the grounds is still stronger coffee – but there are a few catches.

Brewing coffee twice is a little difficult because coffee becomes a lot more finicky once it’s prepared. If you overheat the coffee or brew it too much, it brings out a rather bitter flavor and although the coffee will definitely be stronger, it may not taste as good.

The other challenge of course is how to brew the coffee a second time. You may think it’s as simple as running it through a coffee machine again, but that’s not the case.

Some coffee makers are not designed to run coffee through their tanks and pipes – and even if they can, you still run into the issue of the strange aftertaste.

The second option is very easy – just use double the grounds(so 24-30 grams instead of just 12-15 grams for a single cup) and your coffee will automatically be stronger. 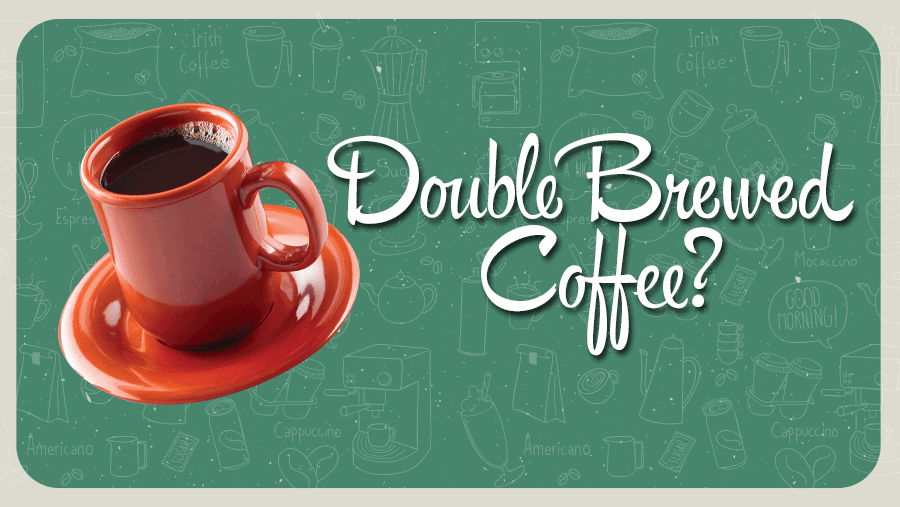 Double brewing means double the caffeine. An incredibly strong cup of double-brewed coffee means you get a jolt of caffeine coursing through your system – for some people, it’s just the burst they need to get going or finish something big like an overnight project or study session.

For others, however, the caffeine may be too overwhelming and they may find themselves irritable or jittery with such a large dose of caffeine.

Double brewing also means extracting double the flavor – when done correctly, of course. The downside to it is if you don’t brew it correctly, you will end up with double the undesirable flavors(excessive bitterness for example).

The stronger flavor – when done correctly – is useful for making iced coffee.

Since the flavor is stronger, you can add ice to the drink without worrying about the ice diluting the coffee to the point of becoming tasteless. Even a shot of milk won’t hurt, and the coffee will still taste like the strong drink you love.

So in the hot summer months when you want a cold, refreshing iced coffee that does not lose out on flavor, then a double brewed iced coffee is a great way to go.

If you don’t have an espresso machine or an Aeropress but you still want to drink specialty coffees like cappuccinos and lattes every now and then, you can use double brewing to emulate the bold espresso flavor.

Then you just dilute the strong double brewed coffee with foamed milk in whatever proportion you’re looking for, whether it’s for a cappuccino, latte, macchiato, or what have you.

Things to be careful of with double brewed coffee

Before seeing the two most effective methods for a killer double brew, there are a few issues that must be addressed – don’t skip them or else you risk ruining your coffee machine!

These issues will come up when you double brew using coffee. If you’re using twice the grounds, these issues won’t matter.

One of the biggest gotchas in double brewing is the fact that there are sometimes very tiny coffee grounds in single brewed coffee that don’t get completely filtered out(just look at the bottom of your coffee cup once you’ve finished drinking and you’ll see what I mean).

As a result, putting coffee through a drip coffee maker a second time can seriously mess up the machine, since they’re not designed to push coffee from their tanks into the filter – they’re designed for water, which is a much softer liquid.

That’s why it’s best to brew the first time around using a machine, and brew the second time using something with less internal parts, like a percolator(moka pot) or french press.

When you are using a drip coffee maker in the second brew, make sure that the basket is cool before you put fresh grounds in it. An over hot basket will result in the grounds getting too hot too fast, and that will mess up the flavor.

Now on to brewing methods.

Method #1: Using a drip machine then a french press

This is the best way to double-brew coffee and will give you the richest, fullest taste. Of course that does depend on the kind of roast you use, but this method is the safest and most straightforward way to do it.

Brew your coffee as usual through a drip machine, and once it’s completed brewing, put some fresh grounds(coarsely ground from freshly raosted beans) in your favorite french press and pour the brewed coffee into the french press.

Let it sit for 4 minutes, push in the plunger, and pour yourself out some strong, fresh, double-brewed coffee!

Method #2: Using a percolator then a french press

Identical to method #1, except you are using a percolator the first time around instead of a drip machine. The result is nearly the same. Percolator coffee tends to be stronger than drip coffee, so this will produce an even stronger cup.

Method #3: Use a percolator twice

Percolators can be used twice with fresh grounds each time to produce a bold coffee. Just remember to let the basket cool a little before putting fresh grounds into it – if you are afraid your coffee will get cold too, then just run the basket under some cold water to cool it down quickly.

Be careful when handling the basket as it is very hot and you don’t want to burn your hands.

Then replace the basket, add your grounds, and you are good to go.

Method #4: Use a drip machine, then a percolator

First, brew coffee as you normally would through your drip machine. Once the coffee is brewed, throw some fresh grounds into your percolator, and brew the coffee again through the percolator.

Method #5: Use a french press twice

This is the safest method to use as there’s very little risk of the french press getting damaged in any way from the coffee the second time around.

You do run the risk of an overly strong coffee, though, because french press produces a pretty bold cup.

The drip and french press method has to be the best method for double brewing coffee – it produces the most balanced taste without any unnecessary bitterness or weirdness, and it’s the safest for your brewing equipment, too – the drip will brew excellent coffee from regular water and your french press can handle incredibly gritty liquids without a second thought.

You can even experiment all you want to see what kind of results are produced.

Try brewing an espresso, diluting it, and running that through a french press or percolator.

Change it up and see what kind of results you get!

What kind of coffee should you use?

That really depends and is completely up to you! Since you are brewing twice, you can use a combination of different roasts to get different flavor profiles and accentuate one taste over another.

Here are some good combinations to get you started, courtesy of this excellent blog post:

Can you brew the same coffee twice?

What happens if you rebrew coffee?

After the first extraction, all the good flavor compounds and oils are lost, so the next time you try to brew, you’ll get a lot of unpleasant flavors and lose many of the good flavors you picked up the first time.