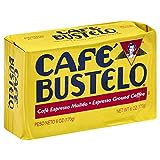 What is the best Cuban coffee brand?

Within the coffee industry, Cuba coffee does really well. Still, the best Cuban coffee according to most coffee aficionados is the Cafe Bustelo coffee.

Cafe Bustelo is dark roasted coffee. It contains 150 milligram of caffeine per 12 fl. oz cup. However, there is something unusual you need to know about this best Cuban coffee. In fact, it is not completely Cuban, in spite of what the coffee industry advertises it as.

Like many real Cubans will tell you, Cafe Bustelo is actually an American brand, in spite of being advertised as the best Cuban coffee. There is still a link with Cuba though, as the founder of the brand lived in Cuba as a young man and eventually moved to the Bronx, New York. There, his ground coffee would become remarkably popular among the espresso-loving Cuban exiles.

What is in Cuban coffee?

You can easily recognise real Cuban coffee beans through their distinct dark colour and very strong taste. When a coffee is made in Cuba, residents will use a special brown sugar that makes the Cuban coffee a lot thicker than the coffee we know over here.

Before it is added, the sugar is whisked with a little bit of espresso. In other words, it is a very unique way of preparing a dark roast, but with an extremely delicious results. Undoubtedly an amazing invention that we all appreciate from Cuba.

What are some of the best Cuban coffee types?

While you may not realise this, there are actually various types of Cuban coffee. This is no surprise, because Cuba is known to grow some of the best Arabica and Robusta coffee beans in the world. With the two most popular types of coffee beans at their disposal, Cuba created some unique Cuban coffee recipes to go with it.

Café Cubano (roughly translated as coffee Cuba) is a popular drink that is often consumed at mealtime. It is made by combining strong espresso with the typical sweet crema. To make this Cuban coffee, you only need some ground espresso and 1/4 cup sugar. Simply whisk 1 tablespoon of espresso with the sugar and then add the rest of the espresso. This will create a crema unlike you ever seen before!

Since the Café Cubano is so easy to make, you will find that it can be a great drink to serve during gatherings. You can easily make 10 Café Cubano in minimal time, you only need a big carafe of espresso and your crema.

There are some social rules that accompany the Colada among Cubans, although it does depend on the area you are. In some areas, the end of a Cuban cigar is dipped in the bottom of the small cup before it is lit. As Cuban cigars are another big part of the export industry in this country, it does prove to be quite the unique tradition.

The Café Con Leche is also a Cafe Cubano. Only this time, the Cuban coffee is served with some hot steamed milk in a separate cup. Then, you take the milk and pour it into the espresso cup before you consume it. That’s all there is to it.

The Cortadito is the typical dark Roast Cuban coffee that is combined with a couple of tablespoons of steamed milk. Since each of the coffee types mentioned here today originate from a dark roast, the cortadito is a much weaker version because of the presence of milk. However, if you are not the biggest fan of a strong dark roast, you can still enjoy a dark roast though this unique Cuban coffee.

What is the history of Cuban coffee?

Coffee growing became popular in the middle of the 1700s. However, it would take until 1790 until the country started exporting its harvest to Spain. While the coffee industry was already big by then, it only hit massive proportion when French coffee farmers were forced to look for new fields due to the Haitian revolution.

Even though Cuba is known for its production of sugar, it is interesting to know that the export of coffee actually exceeded that of sugar by the 1820s. Thirty years later, the country would export a whopping 20,000 metric tons! Unfortunately, the booming industry would hit a snag in 1956.

With the Cuban revolution, the coffee farms were nationalised and this made their coffee production reduce greatly.

While Cuba still struggled with their production in the 60s and 70s, there would be another surge in the 1980s. The surge was caused by the Soviet Union, who funneled money to Cuba for their coffee and their support. However, the fall of the Soviet Union in the 90s would once again have a negative influence on the trade.

With trade embargoes and many countries refusing to trade with Cuba, including the United States trade embargo implemented by Barack Obama, Cuba has continued to struggle with the export of coffee. The infrastructure within the country still has many problems too, but there is also a lack of experienced coffee farmers now.

We must also mention that the climate has become a big problem for the growing process. At the moment, researchers are hoping to discover varietals that can grow better and thrive in the harsher conditions.

Still, despite the problems the production and export chain has had, it is still one of the most desired luxury products in the world. At the moment, real beans are exported to Italy, France, The UK, Spain, Germany, Switzerland, The Netherlands, and Canada.

While one would assume that coffee export makes up the largest part of the income of Cuba, this is not the case. In fact, it only contributes to 1% of the entire economy. However, it is notable that this has gone down by 3% since the revolution. As the original trade ban came into effect in 1963, it could explain why the overall contribution to the Cuban economy remains so low.

Where do real Cuban coffee beans come from?

Genuine Cuban coffee belongs in the category of Arabica and Robusta coffee beans. For more than two-hundred years, they have been grown in the eastern mountains of Sierra Maestra.

The coffee obtains its rich flavor because of the red soil and the mountain climate. The region is also known to grow its coffee organically, which makes it even more valuable in this day and age. When you considered all this coffee is handpicked too, it is not difficult to see why Cuban coffee is considered to be the best in the world.

A lot of the coffee that is grown and processed in Cuba is actually consumed by the local population. However, it is exported as well. That being said, the “real” Cuban coffee can be rather difficult to find.

What is organic coffee?

We mentioned earlier that Cuba also focuses on organic coffee. So, let us take a closer look at what organic coffee is and its unique characteristics.

Organic products must meet certain criteria before they can be labelled as organic. For example, crops must be grown without the use of chemical fertilizers, herbicides or pesticides. While this can make the overall growth process more difficult, the lack of these harmful compounds in the growing process does appeal to many people nowadays.

For a product to be legally organic, it needs to be certified by a recognised third-party or an international agency. Evidently, this means that each organic coffee has its own paper trail. However, there is an exception to the rule. Coffee can be labelled as “organically grown”.

This basically means that the farmers claim the product is organic, but have not obtain the certification from the third party we mentioned earlier. If organic products are important to you, always check for “certified organic” and not solely “organically grown”. While the difference may seem minor, they are important nonetheless.

Can you buy Cuban coffee in the US?

True Cuban coffee brands are not that widely available in the US, but this does not stop you to get the best American version we mentioned earlier, which has some Cuban coffee roots behind it. In the end, it is not the ground coffee or the Cuban coffee beans that makes all the difference, it is the way it is made.

One of the issues with Cuban coffee is the unpredictable climate. The drought has influenced the harvest over the years, but so has the overall poor roads. At this point in time, a lot of the transport happens with mules; this means that coffee is transported in smaller batches and much slower than with motorized transport.

In addition to the problems within the coffee production chain, the import of genuine Cuban coffee was prohibited by President Barack Obama until 2016; this due to the trading embargo that was put into place then. So, while you may encounter much coffee labelled as Cuban, we can almost guarantee that this coffee is obtained from different countries.

The lack of genuine Cuban coffee in the United States is a shame, especially when you consider that there are approximately 1.5 million Cuban-American residents. As most of them live in Miami and nearby areas, you will find that the demand is much higher there.

In this day and age, it is no longer about the Cuban coffee bean, but about the way the beverage is made. Most people use Brazilian or Colombian beans to make a Cafecito (Café Cubano).

In our section with various Cuban coffee types, we already explained the best ways to use coffee ground and get the Cuban coffee experience. Be sure to have a look at those recipes, because we are sure you will find one you will like. 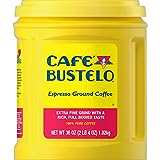