Do you want to know who drinks the most coffee or what the biggest coffee market is? Coffee is popular in many countries, some of which you wouldn’t expect. Because of that, we researched some coffee stats for countries where the drink is common.

We looked at statistics from reputable sources, and we researched local coffee customs. From there, we figured out how the people in these countries drink their coffee and who among them enjoys coffee the most.

Coffee Stats: Which countries drink the most coffee 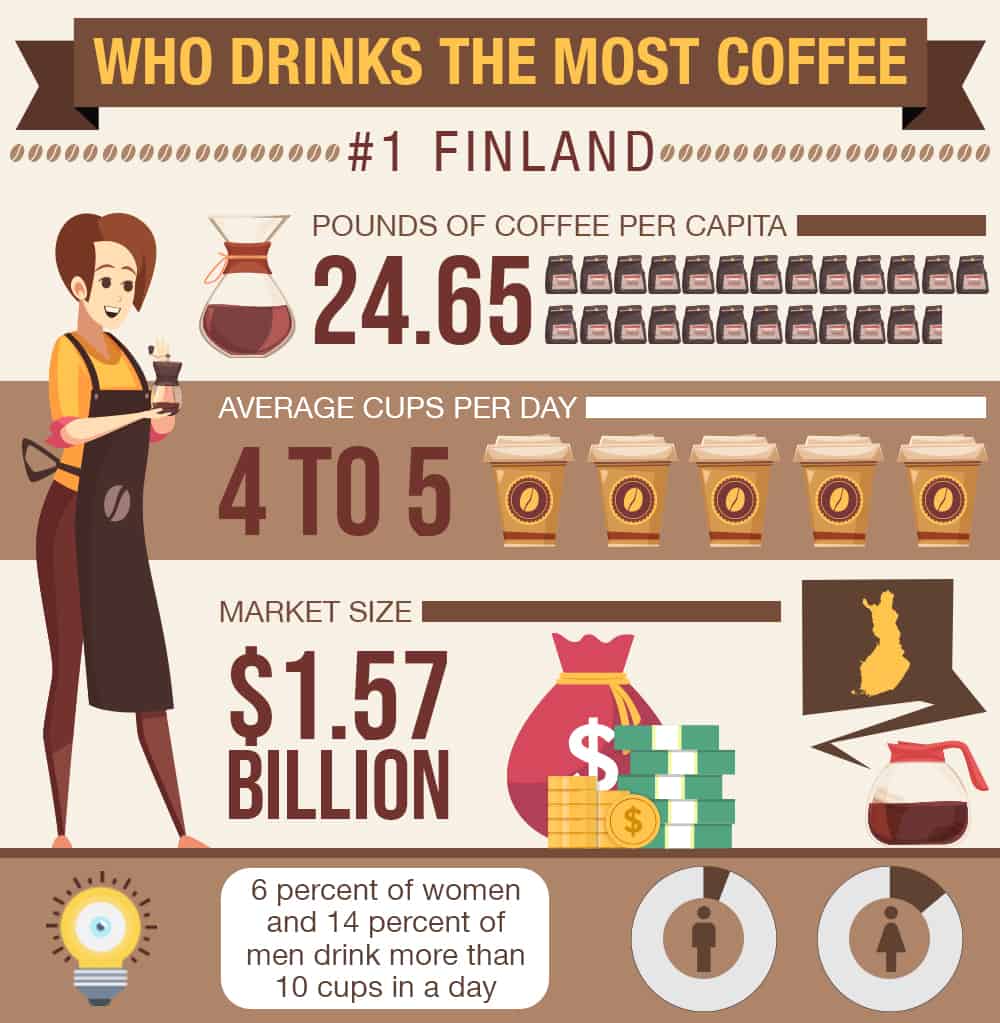 In Finland, they consume about 26.45 pounds of coffee per capita. The Finnish coffee market is about USD 1.57 billion. The average coffee drinker has about four to five cups per day.

About 6 percent of women and 14 percent of men drink more than 10 cups in a day. While Finland has some McDonald’s and Starbucks locations, local shops are more popular. You can find coffee shops all around Helsinki as well as other cities. 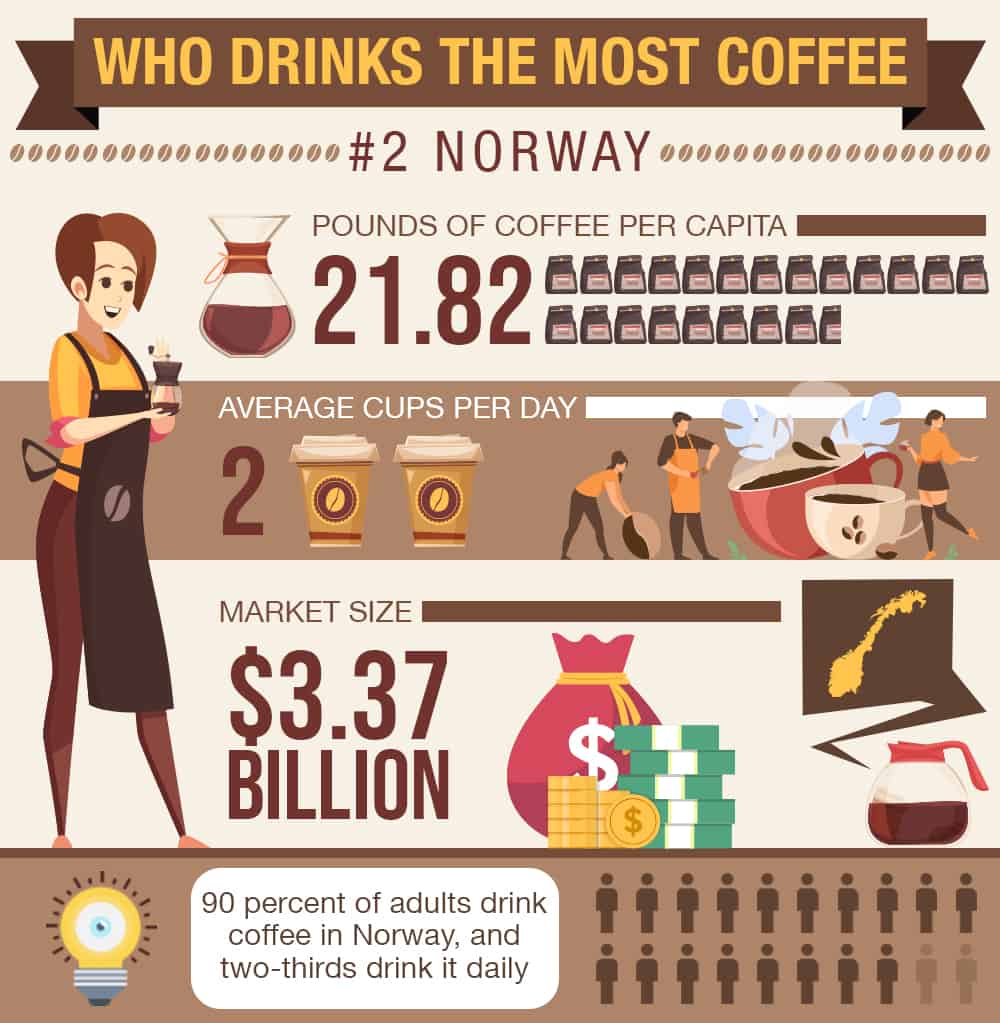 People in Norway consume about 21.82 pounds of coffee per capita. The coffee market in Norway is worth about USD 3.37 billion. Locals love a good light roast, and they prefer to drink their coffee black.

Norwegians drink at least two cups of coffee each day, but some drink way more than that. About 90 percent of adults drink coffee in Norway, and two-thirds drink it daily. 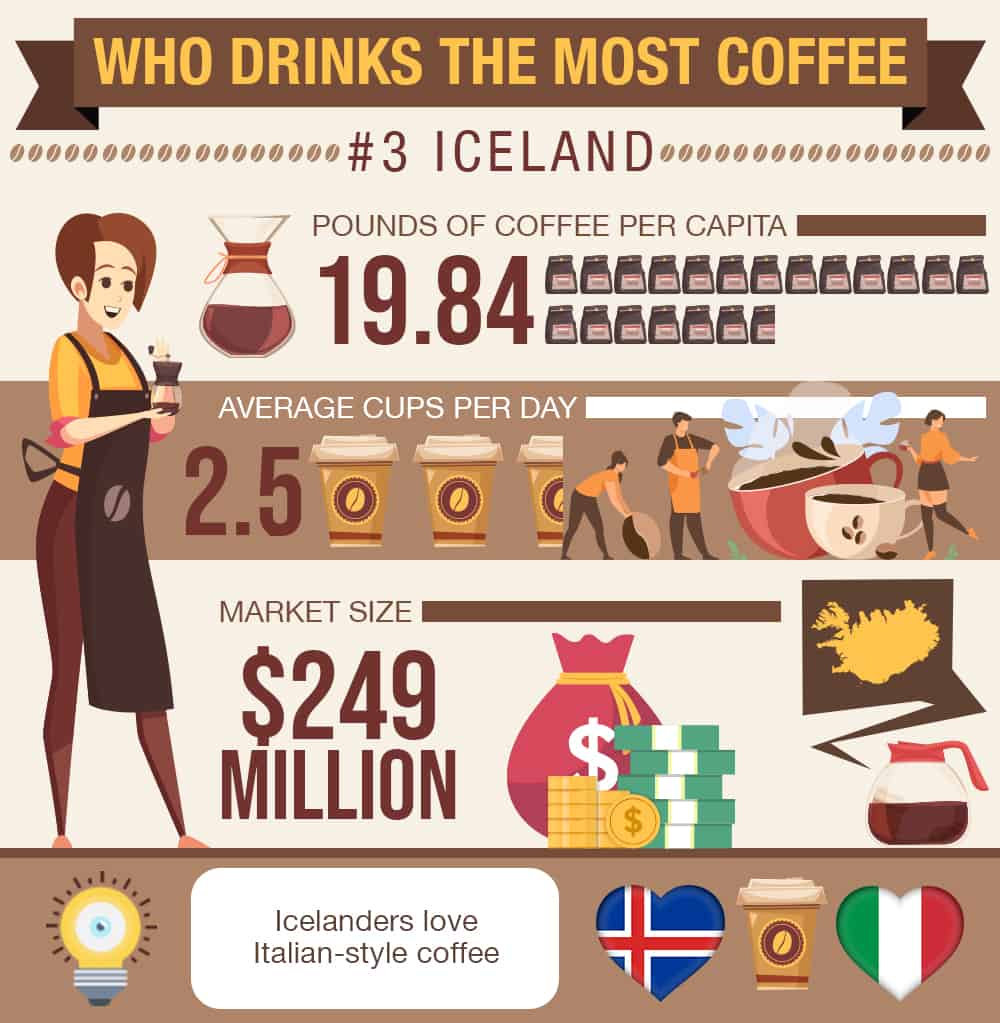 While people in Iceland consume about 19.84 pounds of coffee per capita, coffee stats show the market is only worth about USD 249 million. Local shops reign supreme, and you won’t find an international chain on the island.

Two boutique roasteries operate throughout Iceland and provide roasts to the various smaller shops. Icelanders love Italian-style coffee, including lattes and espressos. Taking the coffee consumption per capita, people in Iceland drink about two and a half cups a day. 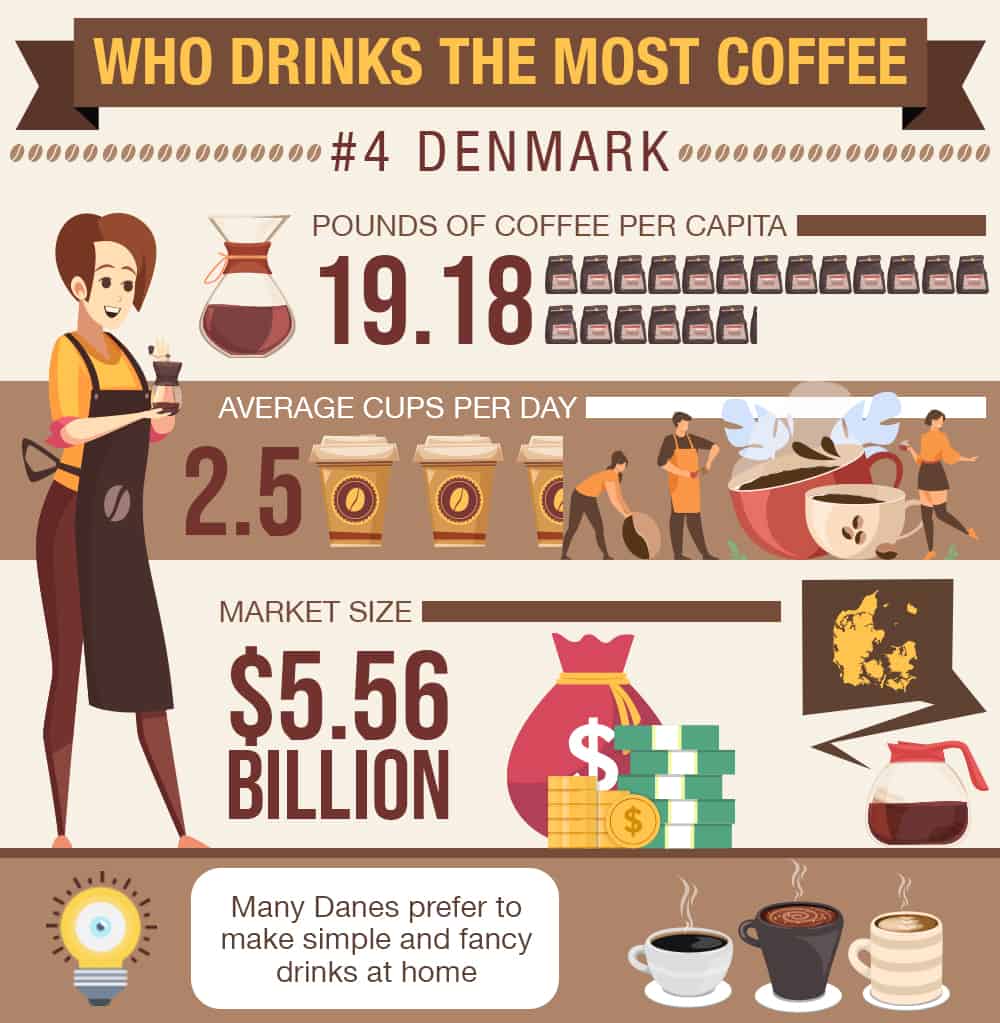 Danes consume about 19.18 pounds of coffee per capita, which works out to 2.5 cups per coffee each day. The local coffee market is worth around USD 5.56 billion, and people of all ages drink it.

People in Denmark love Italian-style drinks, but they also enjoy healthy coffee. While you can find coffee shops around the country, many Danes prefer to make simple and fancy drinks at home. Here is a list of 25 fantastic local coffee shops you can visit. 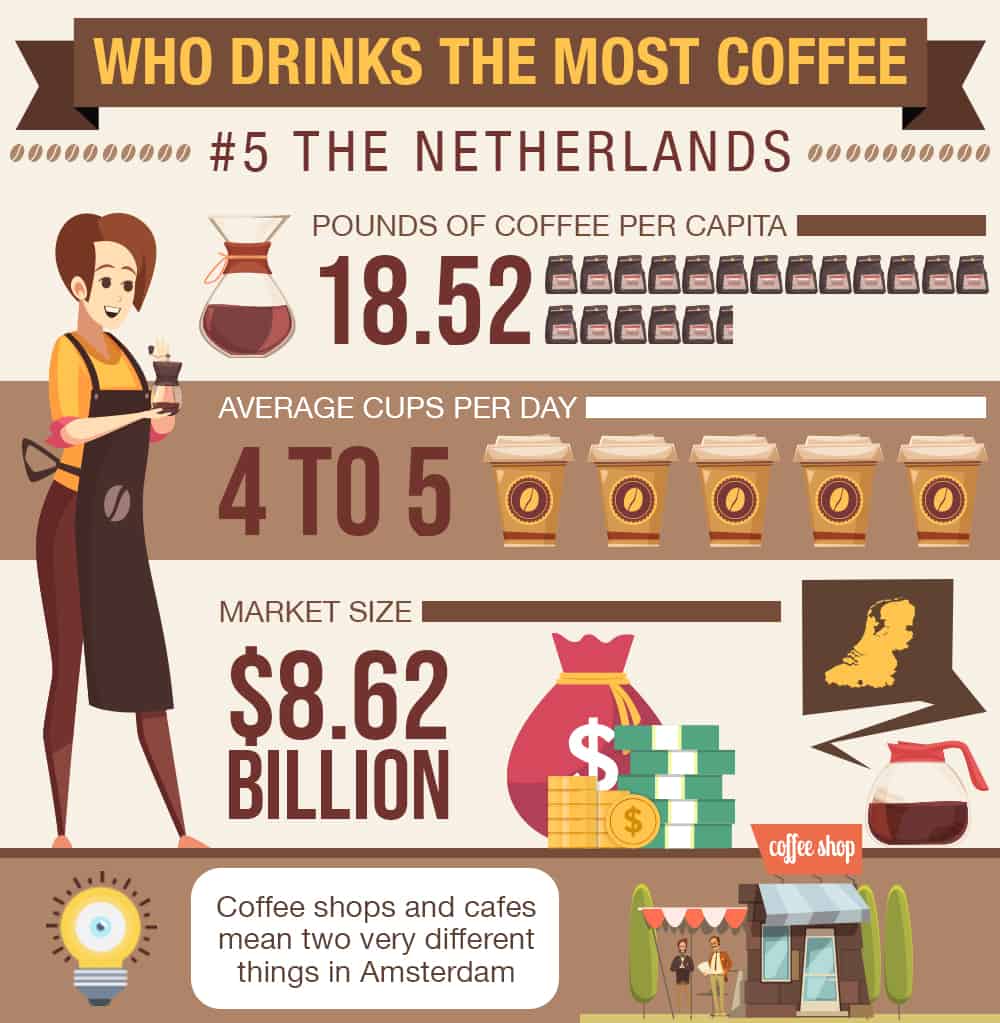 In The Netherlands, coffee stats show people drink about 18.52 pounds of coffee per capita. Their coffee consumption has been going down, but it’s still popular. Single-cup machines have kept coffee popular, but that has increased the cost of coffee.

The Dutch love expensive drinks, and specialty machines have grown in popularity. This coffee market is worth about USD 8.62 billion. You can find around 550 coffee shops in the country, and a third of them are in Amsterdam. These shops attract a variety of coffee drinkers. 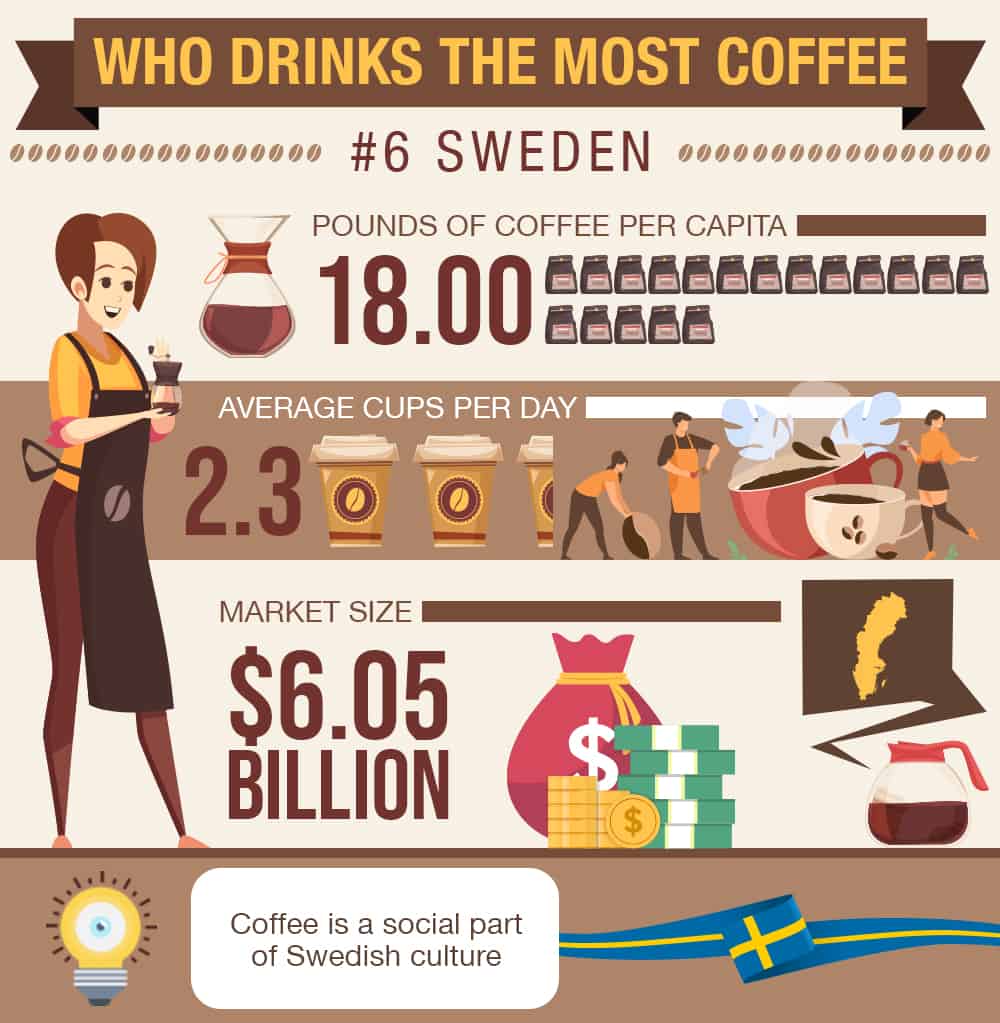 The Swedish coffee consumption rate is about 18 pounds per capita, and the market is worth about USD 6.05 billion. Swedes love roast coffee, which is the largest market segment. The average coffee drinker consumes about 2.3 cups per day.

Coffee is a social part of Swedish culture, so you can expect to sit down at a local shop to drink it. You rarely will get it to go, so allow for some time. Filtered coffee is popular among Swedes, and there are tons of local coffee shops to explore. 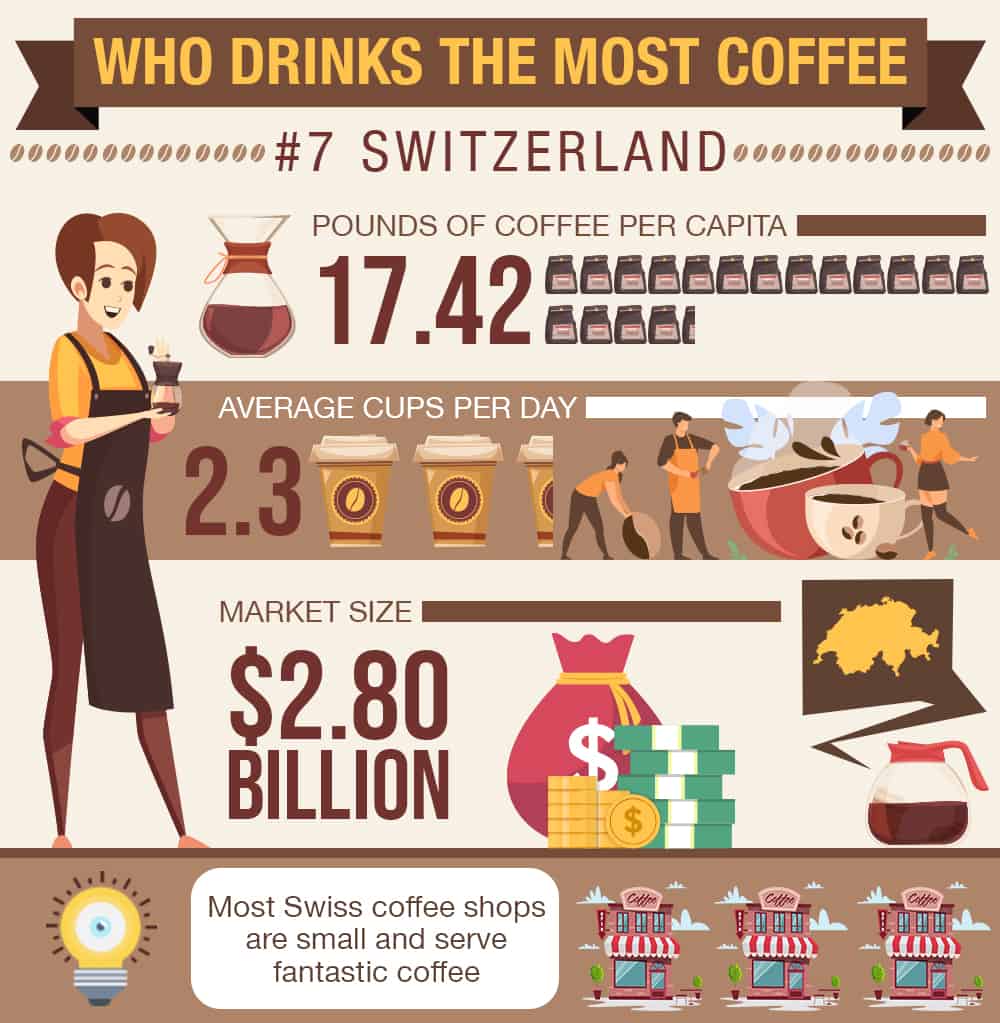 In Switzerland, coffee consumption is about 17.42 pounds per capita, which works out to about 2.3 cups per day. The Swiss coffee market is worth about USD 2.8 billion, and coffee is common among various age groups.

Locals like to keep their coffee simple with a bit of milk, but they may add some wine to spruce it up. Espresso is also popular, but it can be hard to brew. Most Swiss coffee shops are small and serve fantastic coffee, so you can find a good cup no matter where you visit. 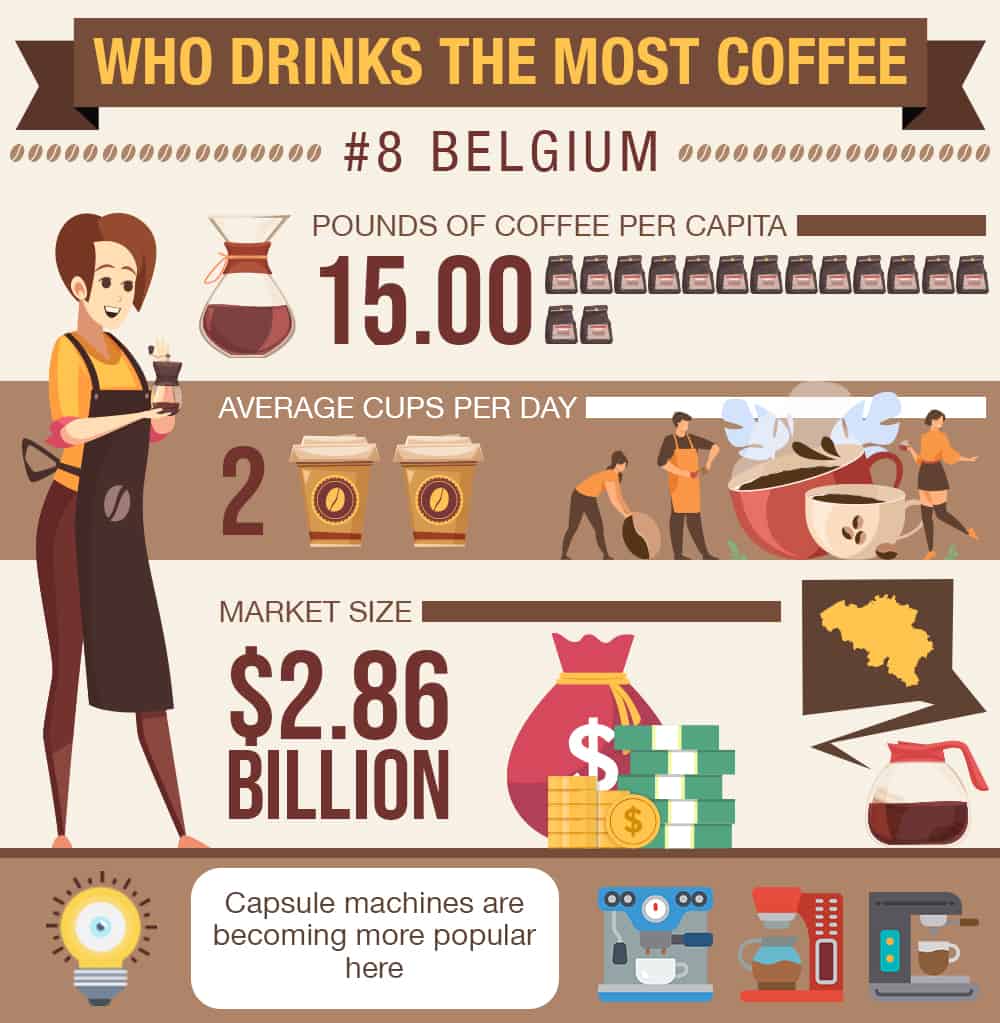 Belgians consume about 15 pounds of coffee per capita, and that equals just under 2 cups per day. The local coffee market is worth about USD 2.86 billion, and capsule machines are becoming more popular.

Making coffee at home means it’s accessible to almost anyone. These are 25 great coffee shops you can visit in Belgium. You’ll also find people of all ages sipping some brew, though older people drink more than younger individuals. 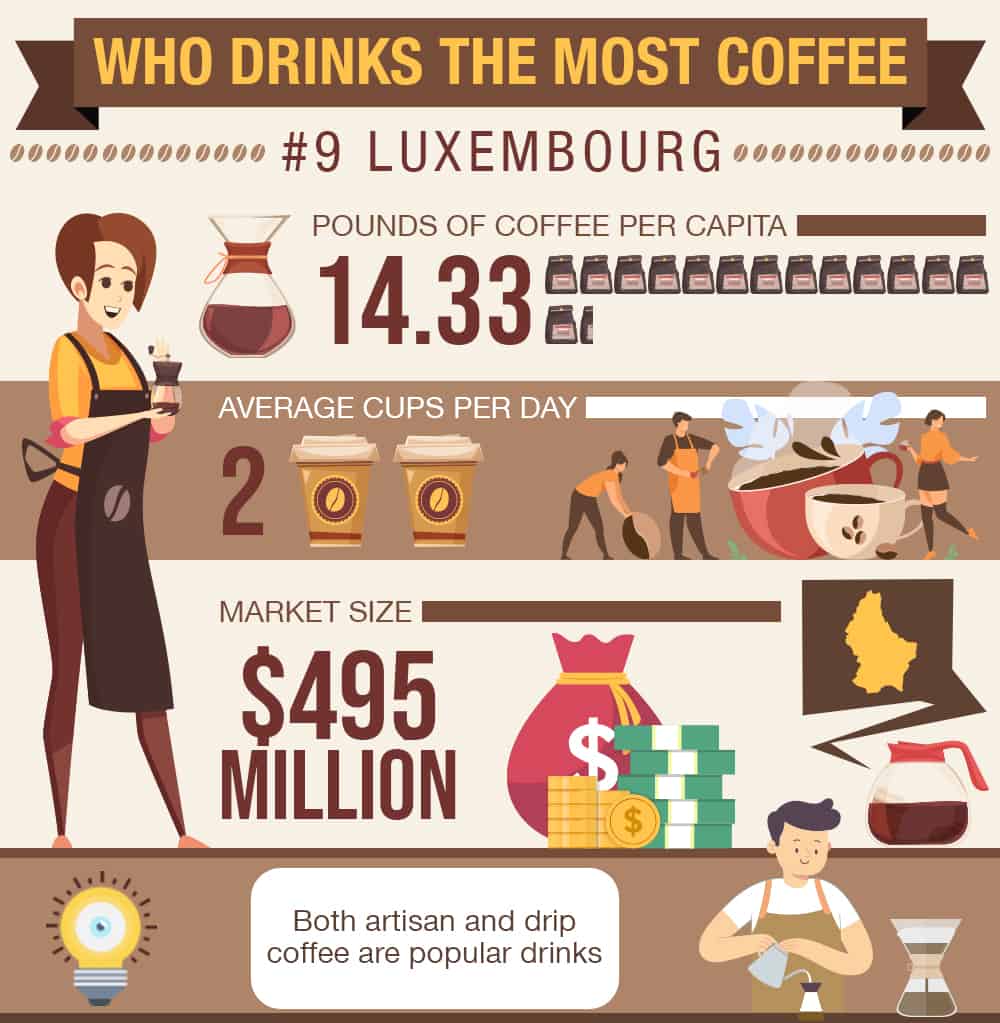 Drinking about 1.9 cups of coffee per day, about 14.33 pounds is the per capita rate in Luxembourg. The national coffee market is worth about USD 495 million, but it’s much smaller than the other coffee-loving countries.

Both artisan and drip coffee are popular drinks, and you can find a variety of coffee shops in the capital city. The locals also enjoy lattes and other specialty coffee. People enjoy their coffee throughout the day, and the drink is popular among different age groups.

Coffee stats show the Canadian market is worth about USD 19.23 billion. Most Candian adults drink about two cups of coffee per day, and the overall rate per capita is 14.33 pounds. Traditional coffee is the most popular choice, but espresso is also common.

About 80 percent of Canadians have had coffee within the past week, and more people consume it than water. Here are Canada’s top 50 fantastic coffee shops, and you can also find international chains. However, more people choose to make coffee at home for convenience or other reasons. 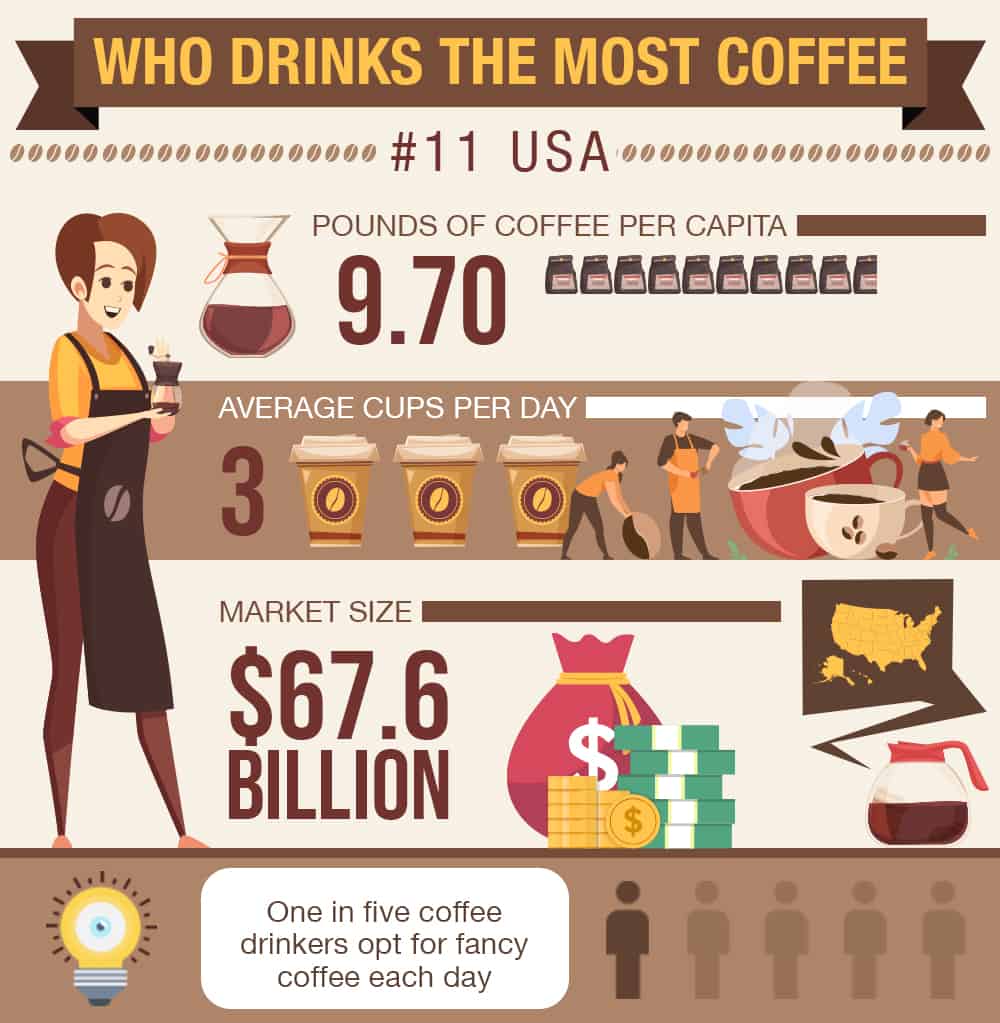 While it’s not part of the top 10(and not even #11, actually), the United States has quite a coffee obsession. Over half of Americans drink coffee each day, and the average consumption rate is about three cups. One in five coffee drinkers opt for fancy coffee each day, while others get it on special occasions.

Coffee stats for the American market show it’s worth about USD 67.66 billion. While Americans don’t drink as much per person as other countries, the large population still allows for a large market. You can find tons of coffee shops in large cities, but small towns can also have their fair share of local choices.

While it can be easy to think Americans drink more coffee than other countries, coffee stats show otherwise. Smaller countries like Finland and Sweden drink much more per day per person. But each country has a unique coffee market worth exploring.