A common question that comes up during discussions of unconventional coffee brewing methods is why can’t you brew coffee in tea bags?

As it usually is, the answer is complicated. Coffee usually has a lot of variables you need to control before water even comes into play, and those variables will often deal a fatal blow to a good brew.

First, coffee grounds are much finer than tea leaves, so you need a way to prevent any grounds from leaking into the water. Additionally, you need a very tight seal on the sachet, which is not always easy to do. This is especially so if you’re making homemade sachets.

The other problem is that of freshness. Coffee grounds have a lot more surface area than coffee beans, and packing coffee grounds into sachets that would be consumed after many months will result in a stale beverage.

Some people argue that the brew is also weaker. Perhaps this is so, but weak brews are also a result of grounds that are too coarse, or not letting the coffee steep for long enough.

It’s also possible you just used a lot less coffee than you should have!

There’s also a commercial reason involved: the general direction that coffee brewing has gone in is countertop machines or brewers, and as far as craft coffee goes, there has not been much focus on portability.

Sure, devices like the Aeropress are really portable, but there’s still a lot of stuff you need to get coffee grounds before putting them in the Aeropress.

Most attempts at portable(think instant) coffee fall flat on their noses because coffee goes state a lot faster than tea does.

Why you may want to brew coffee in a tea bag

Even though I am generally against the idea of brewing coffee in a tea bag, it does have its advantages. For starters, it makes steeping really easy.

French press and cold brew are very popular steeping methods, and there are even giant cold brew bags available which can be used for no mess steeping and removal of coffee grounds.

If you can fund the sweet spot between grind size and fabric quality, the water will be able to get to the grounds, absorb the flavor, and you just pull the bag out for a clean, clear cup.

Though not common in the USA, some countries have a really neat contraption that could be considered a sachet(or tea bag) and is very portable.

Coffee comes packed in a little sachet that has a tab that extends out. The tab lets you fit the sachet onto your cup.

You then open up the top of the sachet, and you’ll end up with a mini filter for making drip coffee! Simply pour over some water until you have brewed enough coffee and you’re good to go!

Of course, this kind of coffee will still run into the freshness problem. 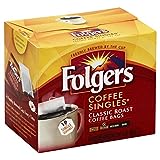 Interestingly, Folgers makes coffee sachets that work just like tea bags. However, I am personally not a huge fan of supermarket coffee because the grounds are quite stale by the time you get around to brewing them.

Sometimes, though, bad coffee is better than no coffee, so you may wish to consider trying them sometime or keeping a few sachets around for caffeine emergencies.

Steeped Coffee is a relatively new company that’s taken the idea of coffee in a tea bag and reimagined it to make it better. Since the most important element of good coffee is good coffee beans, they only use selected roasts from third wave coffee roasters.

To address the problem of freshness, the coffee-bags are nitro sealed. Since nitrogen is inert(it’s the same gas used in potato chip bags), there’s no oxidation, essentially stopping the clock on going stale.

Once you put the bag in the water, it becomes like a french press or any other steeped method of brewing. If you think about it, all coffee brewing methods are essentially getting water to interact with coffee grounds in some way, shape, or form.

Steeping, of course, is the classical way – it’s how it was done before any fancy machines were invented. But whether you use pressure in an espresso, gravity in a dripper, or just molecular energy in a steeped brew, the key elements are always water and coffee grounds.

They offer quite a few different roasts – from light, medium, dark, even decaf. We’re normally not fans of decaf but it does make coffee accessible to people who are sensitive to caffeine, so kudos to them for making decaf as well.

Most of their coffees are sourced from Ethiopia or Colombia, both of which are reputed coffee producing nations since hundreds of years(thousands in the case of Ethiopia).

The last (and possibly most critical) thing to consider about Steeped Coffee is the price point. Steeped Coffee has a pack of 10 sachets that sell for $15.

That comes out to $1.50 per cup. That’s definitely not cheap, but then again, you probably won’t be drinking this as your everyday cup. I feel that Steeped is great for having good tasting coffee on the go so you can avoid the pain of airline and hotel coffee.

Single serve coffees like Nespresso and Keurig are still going to be cheaper.

I feel that the bottom line is Steeped Coffee is definitely a step above instant coffee but unless you fall in love with the flavor as a matter of personal choice(which you definitely might), it’s not economically viable to be an everyday cup. For traveling, it’s definitely a winner.

Coffee tea bags are a tough sell because it is hard to find the sweet spot between a fabric that lets enough water in and a coffee grind that does not leak out.
Even if you do find the sweet spot, single serve coffees are always going to be more expensive than home brewed coffees.

Can you make cold brew coffee with tea bags?

Yes, as a matter of fact! You can’t use traditional tea bags but there are special bags made for cold brew which can hold a lot of coffee and they’re very convenient to steep for long periods of time.

French press and cold brew are both brewing methods which employ steeping to extract the flavor from coffee grounds.