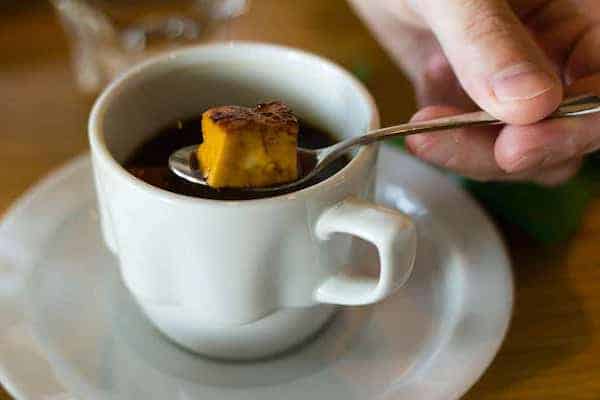 Coffee has been experimented on in many ways, and various things have been added to coffee to make it taste better or different.

Common things are milk and sugar, slightly more uncommon is butter(though bulletproof coffee is gaining popularity) and even more obscure is cheese in coffee!

Originating in Sweden, cheese coffee – also known as kaffeost is quite popular there and is beginning to surge stateside and around the world, too. It’s not surprising, considering Sweden is one of the most coffee-drinking nations in the world!

If you have not given it a shot, you should definitely try it!

Another form of cheese coffee – more modern than kaffeost is actually pairing different varieties of cheese with coffee. But more on that later.

What is cheese coffee, or kaffeost?

Kaffeost was first documented for the internet on Atlas Obscura, which talks about its Scandinavian origins.

Cheese coffee is traditionally made with cheese from reindeer milk, though now, cows milk or goats milk is more commonly used. The cheese used here is also known as bread cheese or cheese bread, because the texture and feel of the cheese is more bready than cheesy.

Black coffee is poured into a wooden mug made from birchwood. Inside the mug is a cube(or cubes) of cheese, and as you pour the coffee over the cheese, it begins to absorb the coffee like a spongy bread would.

You can either pick off the cheese like you would marshmallows from hot chocolate, or you can down the coffee and eat the cheese later, with each bite exploding with cheesy coffee notes.

The cheese also becomes nice and spongy once it absorbs the liquid, and has a unique texture in your mouth.

You need to have it while it’s hot, though, as colder coffee won’t really bode well for your mouth.

Bread cheese is remarkably easy to make and you can try this at home.

How to make bread cheese for coffee

Even though you (probably) don’t have access to reindeer milk, you can easily pick up some bread cheese at your local deli, or even make it at home.

A cooking thermometer will be very useful, and a cheesecloth, too, though you can substitute a handkerchief or a piece of cotton fabric instead.

First off, pour the milk into a large saucepan and add the cream.

Next, get your rennet ready. Most store-bought rennet comes in a tablet form, so just crush the rennet, dissolve it into a little bit of water, and wait 15 minutes for the rennet to fully dissolve.

Now very gently heat up the milk to 37 degrees celcius(98.6 F, or body temperature), remove from the heat, and stir in the rennet mixture.

Let the pot sit for an hour. When you check again, you’ll see that the milk should have started to curdle.

Heat up the milk back to 37 degrees C and stir from the outside into the center as you wait for it to heat up.

Once the curds are almost in the centre, crank up the heat very slightly and bring the mixture to an almost boil. Remember to stir occasionally to evenly distribute the heat.

As soon as the mixture is just about to boil, remove it from the heat.

Be careful when you do this as the curds will be HOT.

Once you’ve gotten out as much liquid as you can with your hands, place a saucepan with some water in it on top of the curds(they should still be wrapped in the cloth) and let it sit for a couple of hours to let the weight of the pot push out any remaining liquid.

After a couple of hours, remove the pot and open up the cloth. You should have a nice block of cheese ready to go!

There’s just one last step before you have bread cheese. Baking it!

Baking the cheese will give it the spongy, bubbly texture you need for coffee.

Place the disc of cheese into an oven proof dish, and put it in the oven at 350 Fahrenheit until it’s golden.

Congratulations! You have made bread cheese!

Now cut it up into small cubes and pour some black coffee over it and enjoy!

Other types of cheese coffee

Another form – an possibly a more original one – is from Vietnam, where coffee is served with a whipped mixture of eggs and cheese. This originated because the coffee shop owner was living in the time of a shortage of easily available milk.

Even though the exact preparation is still a secret, ingredients include egg yolk, butter, coffee powder, condensed milk, and cheese.

This type of Vietnamese coffee is more popularly known as egg coffee.

Now that you know about kaffeost and egg coffee, we would be remiss if we didn’t tell you about one more way to have cheese and coffee: by dunking it in your coffee, or by having a bite of cheese and then a sip of coffee right on top of that.

In the Northern regions of France, the coal-and-industrial communities were dunking their cheese into coffee long before millenials came along and started doing it again.

Once exclusive to the North of France, soldiers began exchanging recipes and communicating during World War II and now it has become quite popular even in Paris, where coffees and breakfast pastries are much more towards the artisanal side.

The only thing about Maroilles? It’s incredibly smelly. If you’re not remotely used to being around aromatic cheeses, you would have a tough time.

It’s so smelly, in fact, that it’s usually double-wrapped to contain the aroma.

Interestingly enough, most smelly cheeses were popular more in the working-class, rural regions of France before eventually making their way to Paris and other big cities. The smelliest cheese in the world, called Vieux Boulogne, is also native to the Northern working-class region.

The proper way to enjoy Maroilles is on a tartine, which is an open faced sandwich.

Cut off a slice of Maroilles and place it on a thin slice of bread. At this point, if you’re still going strong, take a bite of just the tartine to get used to the flavors.

You’ll realize that even though the smell is very strong, the flavors are actually quite pleasant, nutty, and creamy.

Next up, go donut style. Dunk the tartine into your coffee, and take a bit. The bread will absorb a lot of the coffee, but the cheese will also pick up some of the intensity of the coffee and you’ll end up with a really smooth, flavorful bite.

Finally, we have coffee and cheese pairings. These are cheeses that go really well with coffee – not necessarily by dunking them, but rather by having a bite of cheese and a sip of coffee.

Pairing opens up avenues for lots of different flavor combinations that you would not have otherwise been inclined to try, especially in a single dish.

Sweeter cheeses tend to go really well with coffee because the flavors really balance themselves out.

If you dig around a little you may be able to find a local cafe that hosts coffee and cheese pairings.

Best cheeses to pair with coffee 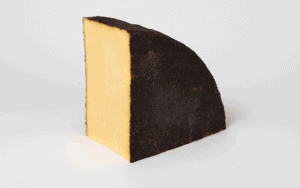 Barely Buzzed by Beehive Cheese Company is an American cheese coated with a rind mixed with coffee grounds and lavender. The result is an incredibly creamy and cheesy flavor with a gentle hint of coffee richness. The rind is very smooth and velvety so you can eat it with the cheese.

Aged gouda cheese has a sweet, caramelized flavor that complements the intensity of coffee very beautifully. Gouda can be aged for a few lengths of time, and generally speaking, the longer the gouda has been aged, the more the flavors would have developed.

Ricotta is one of those cheeses that’s almost like cream. As a result, pairing ricotta with coffee is almost like putting a dollop of cream in your coffee. The smooth, creamy texture dances in your mouth against the strong coffee flavors and it’s almost like you’re having an affogatto. You can also have the ricotta on toast with some jam or chocolate.

Gjetost is a Norwegian cheese that at first glance looks like a giant brick of caramel toffee, and for good reason. It is made by slowly heating the milk until the sugars caramelize and brown, and the result is a very sweet cheese that tastes a lot like the caramel we all love.

Cheddar is known for its sharp taste, which perfectly complements the pleasing bitterness of coffee. Like gouda, cheddar is also aged for varying time periods, and the more you age it, the more the flavors will develop.

Which coffees pair well with which cheeses?

If you have a light-medium bodied coffee that has high acidity, go for creamy cheeses like mozzarella and ricotta.

If you have a medium-full bodied coffee with medium acidity, go for brie, blue cheese, or goat cheese.

If you have a full bodied coffee with low acidity, pair it with smoked mozzarella or gruyere.

If you have medium-full bodied coffee with medium acidity, pair it with aged cheddar.

The beauty of coffee, as I’ve said many times before, is that there is no one right way to enjoy it and you can have it however it tickles your fancy.

It also opens up avenues for new culinary adventures and cheese coffee is certainly one of them!

Do people put cheese in coffee?

Adding cheese to coffee is a Scandinavian tradition. There is a special kind of cheese used which has a bready texture and it soaks up the coffee.

Can I put cream cheese in my coffee?

Sure, if you’re adventurous! Whipped cream cheese will float to the top of your coffee and it’ll be like a red velvet coffee, provided you sweeten the cream cheese a little bit.

What country puts cheese in their coffee?

Cheese coffee is a Scandinavian tradition, mainly enjoyed in Sweden and Norway.