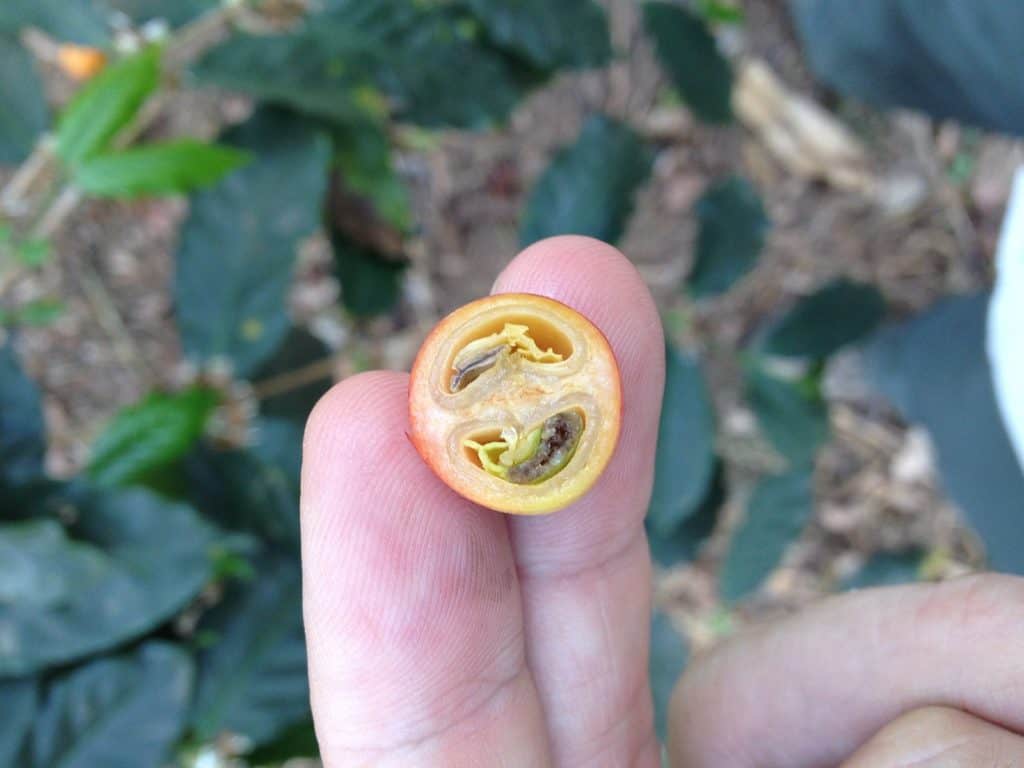 How cascara is produced

Cascara is Spanish for husk, which is what the coffee cherry pulp resembles after the seed has been extracted. The coffee cherry itself is the actual fruit, and we actually discard the fruit and use the seed!

The fruit is tangy and sweet and also contains some caffeine, though not as much as the seed. The fruit provides a protective layer over the precious seed which we then roast, grind, and brew coffee from.

Cascara or the coffee cherry actually comes in quite a few different colors depending on which variety of coffee you choose. Coffee beans end up looking the same because roasting them causes them to go shades of brown!

After the beans have been separated from the cherries, the pulp is often used as fertilizer or feed, or is otherwise discarded. Interestingly, in Yemen and Ethiopia, where coffee is said to have originated from, cascara was used to brew its own beverage, known in Yemen as qishr.

Qishr is the Arabic word for husk or peel. As coffee was migrated from Arabia to Europe, the qishr became known as Cascara, which is Spanish for husk.

Just like good coffee, good coffee cherry tea needs to be grown under the right conditions and cared for properly. Once the seeds have been separated, the pulp is dried to form a leathery, raisin-y dry mass. This is cascara, which you can then steep in water for brewing coffee cherry tea.

Until recently, coffee cherry tea was unheard of outside of Yemen, Ethiopia, and a few select places. Even today, you may not be able to find it as easily as you’d hope in your local coffee shop.

Since speciality coffees have burst on the scene with extra demands for cold brews and hand-poured coffees, more speciality beverages are slowly gaining popularity and some shops have started to stock the dried cherries for brewing at home. If you’re lucky, you may find it at a local coffee shop, too.

Slingshot Coffee Co has their own cascara drink if you’d like to check them out. They’ve partnered with Aida Battle whose family has been farming coffee for generations. She is based in Latin America and she has been drying coffee cherries for many years now. Aida is now one of the premier cascara producers in the world.

If you take a sip of cascara expecting it to taste like coffee, you’re going to be taken by surprise! Even though it is the coffee cherry, you won’t find any of that typical coffee flavor in it.

Expect a more herbal, sweet, and fruity taste. If you have really good taste perception, you may be able to taste hibiscus, cherry, red currant, or mango.

How to make cascara tea(qishr)

Since the drink is not so popular in the Western world yet, many cafes are still playing around with the ratio to see which produces the best results.

For a medium drink, use around 5 to 7 grams of cascara for every 8 ounces of water. The water should be just below boiling temperature.

Steep for about 3-5 minutes, strain, and enjoy!

The Cascara Latte is actually a proprietary beverage made by Starbucks, but it has since been discontinued. I suppose it did not gain the popularity that Starbucks was expecting.

After 3-5 minutes of steeping, mix the tea into steamed milk and you’re good to go!

How to make cascara cold brew

Cascara can also be cold brewed. For every 8 ounces of water, use 5 tablespoons(note that it was grams for hot tea, this is now tablespoons) of cascara and steep in cold water in the fridge for 24 hours. Finally, strain and enjoy.

A neat hack for straining is to use a french press to steep – hot or cold.

Is cascara coffee or tea

Interestingly enough, cascara kind of falls between the spectrum of coffee and tea. It’s not exactly coffee, since it tastes nothing like it and the actual coffee flavors are in the bean.

It’s not exactly the tea either, since it’s from the coffea genus, and instead of leaves, it’s made from a fruit!

A better category for this to fall under is a tisane rather than a coffee or a tea.

How much caffeine in cascara or coffee cherry tea

Coffee cherry tea does not have nearly the same amount of caffeine as coffee, though it certainly has some caffeine. Square Mile Coffee did a study through a German lab to test exactly how much caffeine there is in cascara.

The first factor to influence how much caffeine there is in cascara or coffee cherry tea is the ratio of water to cascara. It did not make much of a difference how long you steep it for, though. That’s pretty interesting!

One last thing before you go: since you’ve come to this article, you’re looking for coffee cherry tea, so don’t confuse this cascara with cascara sagrada, also known as Rhamnus purshiana.

They both look similar and the names are similar too, but cascara sagrada is actually dried bark from the California buckthorn tree. Its main use is as a laxative.

Make sure that the cascara you’re buying is indeed the coffee cherry and NOT cascara sagrada. To avoid any confusion, just remember to pick it up from a craft roaster rather than anywhere else.