Coffee drinkers are sometimes on two extremes of a spectrum.

Some are looking for more caffeine, and others are looking for less. One very popular drink is cappuccino. Since it seems to be more milk than coffee, the question arises:

Does cappuccino have caffeine?

Yes, a cappuccino does have caffeine. Cappuccino is made with a shot of espresso, which contains less caffeine than what you’d find in an 8 ounce cup of brewed coffee, but it’s still caffeine nonetheless.

How much caffeine in a cappuccino?

It’s difficult to say exactly how much, but on average, a cappuccino made from a single shot of espresso has about 80mg of caffeine per serving(6 ounces or so).

Does that mean cappuccino is weaker than regular coffee?

Everything else is steamed milk.

If you were to have a cappuccino with a double shot of espresso, the caffeine total would be doubled, too, now reaching 160mg, comparable to a regular cup of brewed coffee. 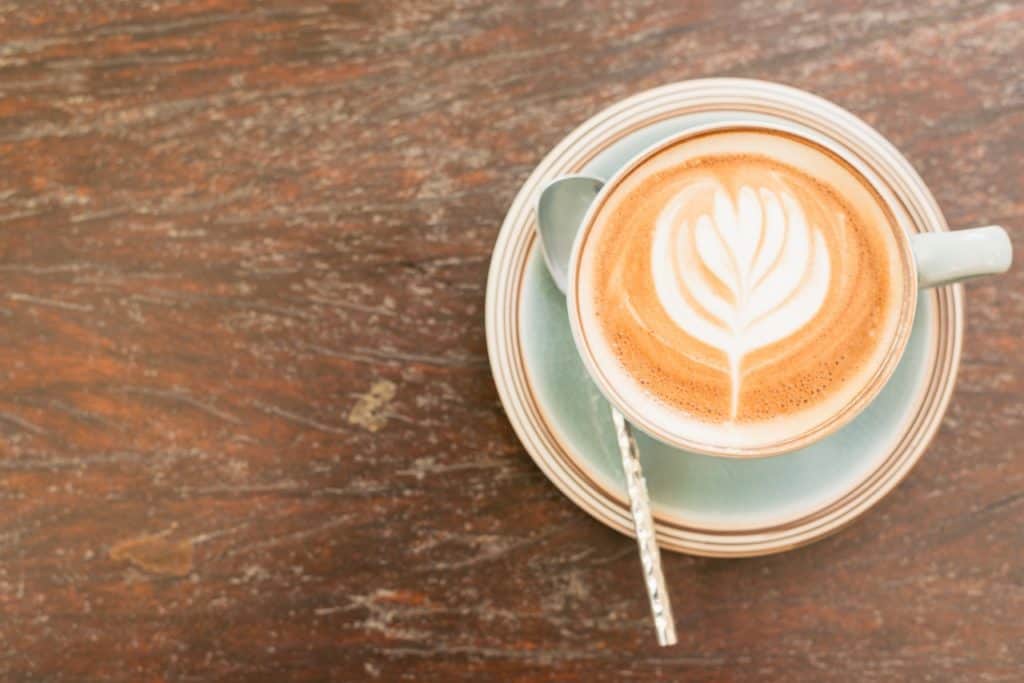 Are these exact figures?

In the section above, I’ve mentioned that cappuccinos contain about 80mg of caffeine per serving and drip coffee contains about 160mg.

Are those exact figures? No way! Unfortunately, it’s difficult to say exactly how much caffeine there will be as there are a lot of other variables.

The most potent variable here is the kind of coffee bean you’re using.

First off, arabica beans have less caffeine than robusta beans. Some coffee beans within the arabica or robusta family tend to have more caffeine than others, and some manufacturers even make high caffeine blends (usually from mixes of robusta and arabica) that have excessive amounts of caffeine in each serving.

If you were using these to make your cappuccino, you’d have a lot more caffeine per cup.

Your typical 8 ounce cup of brewed coffee has 160mg of caffeine. A typical cappuccino as you saw above has about 80 mg of caffeine.

It’s also important to consider the volume of coffee you are drinking. A 12 ounce cup of coffee has nearly 300mg of caffeine, whereas a 12 ounce cup of cappuccino made from two espresso shots has a caffeine content of around 160 mg. 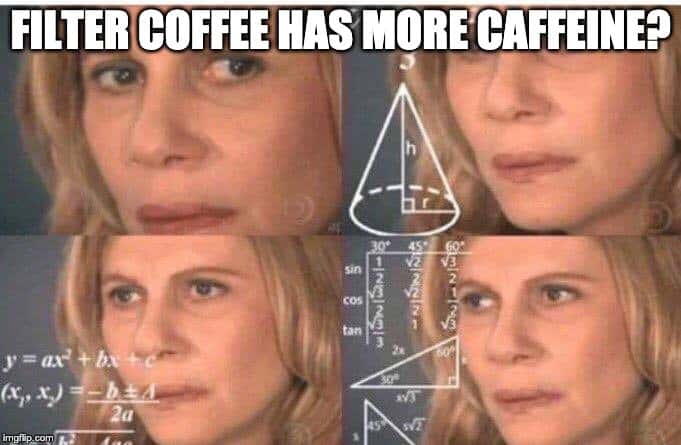 Isn’t there as much caffeine in cappuccino as coffee? Usually, we imagine cappuccino and espresso being much stronger.

The taste is that much more intense, too.

At this point, you’re probably wondering why espresso(and by extension, cappuccino) is considered stronger than drip coffee but has so much less caffeine.

Espresso is stronger than drip coffee, much stronger. Consider this:

If you were to drink the same volume of cappuccino or espresso – almost 5 shots to get to 8 total ounces, you’d have consumed a whopping 400mg of caffeine.

The same volume of drip coffee gets you just 160mg. See the difference?

It also depends on the amount of coffee grounds that you use. If you were to use enough coffee grounds for just one shot of espresso and pulled 5 shots from it, you’d have a very diluted beverage.

But if you pulled 5 shots from 5 servings of coffee grounds, you’d get the 400mg of caffeine.

What about cappuccino calories?

There’s just no doubt here – and this is especially true if you’re buying the stuff from fast food coffee chains.

If you decide to add one tablespoon of 2% milk(steamed milk, of course) and one teaspoon of sugar, you’re looking at 25-26 calories per cup.

Note: If you tend to drink 16 ounce coffees(or any other large serving), you’ll need to multiply the figures provided here accordingly.

Compare that with cappuccino: along with the espresso shot, which is 1-2 calories, you’re adding 4 ounces or so of steamed milk, so the total calories comes out more to around 60 per single serving.

Most coffee shops won’t serve you 6 ounce cappuccinos, though, as their sizes will be more like 10-12 ounces, in which case you can double to 60 calories straight to 120. Added sugar or syrups? PILE ON THE CALORIES!

Are calories necessarily bad? Of course not, if you’re drinking and eating in moderation and have room for the calories, enjoy! But if you’re watching your weight and food intake, you need to take this into consideration.

Note: calorie estimates are from the USDA.

How much caffeine in cappuccino mix?

Instant cappuccino does have caffeine in it: anywhere between 30-100 mg per serving.

I don’t really consider instant cappuccino to be “coffee”, but I digress…

The reason the amount of caffeine is so vast is that instant coffee is quite temperamental and manufacturers use a whole host of different beans and blends to make it.

As a result, it’s hard to say how much caffeine there actually is and the only way to know for sure is by reading the label.

These are just some ballpark figures. So whether you like Grove Street or even gas station cappuccinos, you can expect somewhere in this range of caffeine.

Other brands will vary, but since it is still made from coffee, you can definitely expect it to have caffeine unless stated otherwise.

Here’s a useful tip: if the cappuccino is made from an espresso shot, it will have more caffeine than automatic machine cappuccino or powdered cappuccino.

How much caffeine in cappuccino K-Cups?

Grove Square is a company that makes K-Cup cappuccinos and they advertise that each of their cappuccino K-cup contains about 30 mg of caffeine.

A typical Keurig K-Cup contains around 100 mg of caffeine, which is about what you’d get out of 2 ounces of espresso.

Which has more caffeine, a cappuccino or a latte?

Both cappuccinos and lattes contain about the same amount of caffeine as they are both made with a single shot of espresso.
Of course, the content may vary if different beans are used for making the espresso.

What’s the difference between cappuccino and coffee?

Cappuccino is made with espresso, which is a type of coffee. One espresso shot is 1.5 ounces, and a cappuccino has 4 ounces of milk added to that. A typical drip coffee is 6 to 8 ounces.

Does cappuccino have sugar?

A traditional cappuccino does not usually have sugar, but many people like to enjoy it with a bit of brown sugar.

Do cappuccinos have coffee in them?

Cappuccinos do have coffee in them, as they are made with one part espresso and two parts steamed milk.